Early enrollees who could make an instant impact

Earning immediate playing time as a freshman is a chore for even the most high-profile recruit, especially for a player heading to a major power that has so much talent and depth already.

But it seems that every year more and more high school players are graduating early and enrolling in their college of choice in January.

With the start of spring football just around the corner for programs across the country, let's take a look at the Class of 2013 and check out the prospects enrolled early for spring ball who have a chance to make an immediate impact on the field next fall.

Keep in mind that while not every early enrollee excels in his first season, two-time defending BCS national champion Alabama received stellar seasons from running back T.J. Yeldon and wide receiver Amari Cooper last fall when they came to Tuscaloosa early.

With Mike Gillislee moving onto the NFL, the Gators need a No. 1 back to emerge. And the son of former UF great Fred Taylor could be the guy. Sophomore Matt Jones and junior Mack Brown will enter spring drills atop the depth chart in the backfield, but both had limited roles in 2012. Jones did average 5.3 yards per carry, but Brown carried the ball just 25 times. And Taylor may just be too talented to keep off of the field for too long. If he is able to learn his blocking assignments, become a solid pass-catcher and learn the nuances of the position, it may not be long before he emerges as the lead back for a Gators squad that wants to continue to play smash mouth football on offense — especially because the team’s passing attack still has questions. Taylor could provide the sort of offensive boost that Georgia’s Todd Gurley gave the Bulldogs last fall. 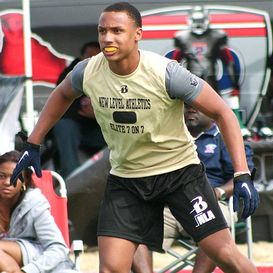 Trojans head coach Lane Kiffin is desperate for Clancy Pendergast to turn around a defense that just never could play up to expectations under Monte Kiffin. With T.J. McDonald and Jawanza Starling moving on, Cravens could step in at the safety position. Although seniors Demetrius Wright and Gerald Bowman return, the defensive backfield is a concern for 'SC. And Cravens is a ball-hawker whose big-play ability could be huge for a unit that will be finding its way under a new DC. He also is adept at run support as well.

The Wolverines have done a wonderful job of remaking their defense since the arrival of head coach Brady Hoke. And defensive coordinator Greg Mattison has been a big part of that process. The 6-6, 249-pound Charlton could be used as a situational pass-rusher by the Maize and Blue if the Ohio native has a big spring and fall camp. Hoke is a former defensive line coach, so that’s always a bonus for a young player trying to crack the lineup.

The Crimson Tide will always rely on a power run game. But Amari Cooper’s emergence last year gave quarterback AJ McCarron a much-needed deep threat, and tight ends/H-backs have always been a big part of the ‘Bama offense. Enter Howard, who has a chance to earn immediate playing time with Michael Williams departing and sophomore Brent Calloway recently getting arrested. Sophomore Brian Vogler and redshirt freshman Malcolm Faciane are atop the depth chart as we enter spring drills, but Howard’s 6-6, 225-pound frame will be in the mix for early playing time. He’s just too talented not to make a mark at some point in 2013. He, of course, will need to get stronger to see the field, especially against SEC opponents and even in the opener against Virginia Tech. But Howard’s size-speed combo as well as his good hands are intriguing for offensive coordinator Doug Nussmeier.

The New Jersey product, who was formerly Eli Woodard, is one of the more athletically gifted Class of 2013 corners, and he’s smart as well. Apple headlines arguably the best set of defensive backs from this year’s class, which also includes fellow early enrollee cornerback Cam Burrows for Ohio State. The 6-foot, 185-pound Apple played both ways in high school, including wide receiver. That experience gave him very good ball skills, so he could become a playmaker for the Buckeyes on defense. He is also good in run support.