We all love when conference play begins in college football. But before we get into late September and early October when league action kicks into high gear, nonconference play is all the rage.

Let’s take a look at some of the biggest nonconference games on the slate for 2011.

Part II will run Sunday morning at the NFP.

TCU at Baylor: The Bears were crushed by the Horned Frogs 45-10 last season, so Art Briles’ bunch has likely had this game circled on the calendars since very early in the offseason. Quarterback Robert Griffin III leads a prolific Baylor offense, and the Horned Frogs could be susceptible in the secondary, at least early in the season until their new starters get acclimated. On offense, TCU will be led by new starting quarterback Casey Pachall, who dealt with a shoulder issue in fall camp. Can the Bears put behind a lackadaisical loss to Illinois in their bowl game and start 2011 with a bang, or will it be business as usual for Gary Patterson’s squad?

Boise State vs. Georgia (in Atlanta): Go against Boise State at your own risk. Any team coached by Chris Petersen and quarterbacked by Kellen Moore has a chance on any given Saturday. The losses of receivers Austin Pettis and Titus Young should be negated a bit by the emergence of Tyler Shoemaker and Geraldo Hiwat, and the Broncos still have bruising yet elusive running back Doug Martin. For Georgia, Mark Richt enters a potentially make-or-break season. While Aaron Murray may be the best quarterback in the SEC, will he be able to stand upright behind a line hit with the injury bug? The most pressing issue, however, is whether the Bulldogs will be able to run the football with untested Richard Samuel or true freshman Isaiah Crowell out of the gate.

LSU vs. Oregon (in Dallas): This is unquestionably the marquee game of opening weekend. The Tigers and the Ducks — the game that will have the full attention of Willie Lyles. LSU should have the home-field advantage with the game being played in Dallas, but who will be under center for the Tigers? After being praised by head coach Les Miles throughout the offseason for his improvement both on and off the field, quarterback Jordan Jefferson was reportedly involved in a fight outside a bar last week and his status is in question. Meanwhile, will the Ducks be able to find their mojo offensively after their rushing attack was grounded by Auburn the last time we saw Chip Kelly’s squad on the field last January? Keep an eye on the Oregon offensive line, which is breaking in a few new starters. That unit struggled against the Tigers in the BCS title game.

Northwestern at Boston College: The Eagles will be without its best offensive weapon, Montel Harris, after the senior running back needed a second surgery on his bum knee. But will NU have its best offensive weapon available? All-everything quarterback Dan Persa may not quite be 100 percent after rupturing his Achilles tendon late last season, so his mobility could be limited. That puts the spotlight on Wildcat running backs Mike Trumpy and Adonis Smith. An improved NU defense should be enough to steal a win in Chestnut Hill. 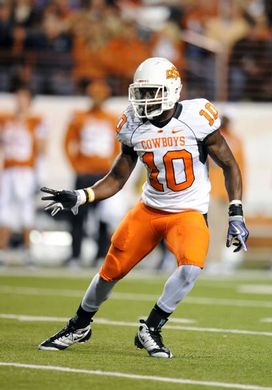 ICOSafety Markelle Martin is the leader of Oklahoma State's secondary.

Arizona at Oklahoma State: This game is a rematch of last year’s Alamo Bowl — an embarrassing 36-10 blowout loss for Arizona that was the team’s fifth straight loss to close out the 2010 campaign. Wildcats quarterback Nick Foles has a lot of weapons at his disposal, especially with former Texas Longhorn Dan Buckner joining Juron Criner in the receiver corps, but their offensive line is very inexperienced. And Arizona’s defense, which disappointed last season despite the presence of ends Brooks Reed and Ricky Elmore, will have a problem keeping up with the high-octane attack of the Cowboys led by Brandon Weeden and Justin Blackmon. New Pokes offensive coordinator Todd Monken was essentially taught the offense by his players this offseason — that’s how intent head coach Mike Gundy was about not tinkering with a good thing. While questions remain about how consistent the OSU defense can be, safeties Markelle Martin and Johnny Thomas will patrol the secondary. Even if this game ends up in a shootout, the Cowboys are more explosive.

Missouri at Arizona State: Blaine Gabbert may be gone, but James Franklin has enough playmakers around him to keep this offense moving. Meanwhile, the Sun Devils have serious issues on defense because of several key injuries, especially in the secondary. Even though quarterback Brock Osweiler has shown flashes, he remains inexperienced. And while the Tigers lost freakish end Aldon Smith, the pass rush should still be consistent. Keep an eye on the Missouri offensive line in this one. It’s a good unit, but the loss of starting left tackle Elvis Fisher to a season-ending knee surgery turned a great unit into a good one.