Yesterday at the NFP I set the stage for the rest of the summer across the college football landscape.

Today, let's take a quick glance at what we can look forward to as the 2012 season quickly approaches.

Here are the most intriguing matchups on the Week 1 slate.

ICONSteve Spurrier's Gamecocks open on the road against Vandy.

South Carolina at Vanderbilt: The Gamecocks, who will once again challenge for the SEC East crown, have a very tricky test in Nashville against James Franklin's upstart Commodores. Is an SEC upset on the horizon for the first day of the season? We'll see how Marcus Lattimore looks in his first appearance since he injured his knee last fall.

Washington State at Brigham Young: We will get our first chance to see how Mike Leach has put his stamp on the Wazzu program in a battle of the Cougars. Riley Nelson once again is the starting quarterback for BYU with Jake Heaps onto Kansas.

Tennessee vs. North Carolina State*: This is a make or break season for Volunteers head coach Derek Dooley, and his team will open with a dangerous nonconference game against Tom O'Brien's Wolfpack. Keep an eye on the quarterback duel between Tyler Bray and Mike Glennon. And can Sal Sunseri bring a little Alabama defensive flair to his Vols unit?

Boise State at Michigan State: The Broncos have yet another chance to make a splash on opening weekend when Chris Petersen's bunch travels to East Lansing to take on Mark Dantonio's Spartans. Both teams will be breaking in new starting quarterbacks, and Boise State has had to replenish its defense. Meanwhile, Michigan State is arguably the Big Ten's most athletic squad, especially on defense.

Notre Dame vs. Navy*: Who will start at quarterback for the Fighting Irish when they collide with the Midshipmen in Dublin? I've maintained that head coach Brian Kelly should turn the offense over to Everett Golson, but Andrew Hendrix and Tommy Rees remain in the mix. Meanwhile, Navy's offense won't test an inexperienced ND secondary in this one.

Iowa vs. Northern Illinois*: I'm not putting the Hawkeyes on upset alert, but this is an intriguing Big Ten-MAC matchup at Soldier Field. Last year the Huskies were no match for Wisconsin at the NFL's home of the Chicago Bears, but they won't be facing a high-powered offense like the Badgers this time around. All eyes will be on new Iowa offensive coordinator Greg Davis, who will likely put games into the hands of quarterback James Vandenberg this season.

Clemson vs. Auburn*: Another year, another battle of the Tigers. How will new coordinator Brian VanGorder's defense fare against the high-powered offense run by Chad Morris? Clemson could be a darkhorse national title contender if Brent Venables can get enough out of that defense in his first season.

Michigan vs. Alabama*: We know that Nick Saban never rebuilds. He reloads. So the most interesting aspect of this game for me is how Wolverines quarterback Denard Robinson will fare against what will once again be an incredibly physical 'Bama defensive front. Meanwhile, expect better production from the Crimson Tide's receiving corps in 2012.

Arkansas State at Oregon: Gus Malzahn makes his head-coaching debut with the Red Wolves in Eugene as he takes on Chip Kelly and the Ducks' high-octane offense. Coordinator Nick Aliotti's defense improved in the second half of last season, but it will be tested by Malzahn's offensive attack. 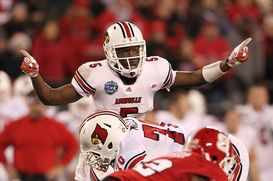 ICONTeddy Bridgewater will begin his first full season as a starter at home against Kentucky.

Kentucky at Louisville: This in-state battle is always one of the more under-the-radar entertaining nonconference contests of the year. There is high hope for the Cardinals with sophomore quarterback Teddy Bridgewater entering his first full season as the starter. Meanwhile, Joker Phillips will be looking for playmakers to emerge for his Wildcats.