Earlier this week we took a look at the college football teams that face the most difficult non-conference schedules this fall.

Today, let's take a glance at the squads that face the easiest non-conference slates.

Arizona: Expectations are high in the desert after Rich Rodriguez's successful first season in Tucson. And the easy nonconference slate will assure the Wildcats of a fast start. Their three non-league foes are FCS squad Northern Arizona and Texas-San Antonio as well as a road game against UNLV. The Rebels were 2-11 last season. 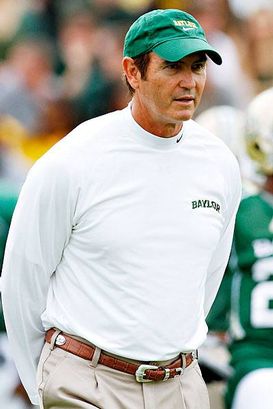 US PRESSWIREArt Briles' team won't leave Waco for the first four games of the season.

Baylor: The Bears are becoming the "it" program in the Big 12, and the momentum from a strong close in 2012 should carry over to the start of 2013 as Art Briles' team won't leave Waco for the first four games of the season, with three of them nonconference contests. The easy stretch begins with FCS squad Wofford, then a Buffalo team that has fallen on hard times since Turner Gill departed. But the last nonconference foe is Louisiana-Monroe, which gave the Bears all they could handle last season. The Warhawks beat Arkansas last fall and feature exciting quarterback Kolton Browning. But Baylor should be equipped to have an easier time with ULM this time around.

Kansas State: The Wildcats are replacing a ton of talent from last year's squad that earned a berth to the Fiesta Bowl, most notably Heisman Trophy finalist Collin Klein and star linebacker Arthur Brown. So it works out well for Bill Snyder's bunch that a favorable nonconference slate is on tap. Not only does K-State get to play eight games in Manhattan, but Louisiana-Lafayette appears to be the toughest non-Big 12 foe. Of course, Todd Berry's squad almost beat Florida in The Swamp last year. But K-State also gets North Dakota State and UMass, which is struggling in its early incarnation in the MAC.

NC State: Dave Doeren will eventually win in Raleigh, and he's done a nice job of landing transfer quarterbacks Brandon Mitchell and Jacoby Brissett. But the Wolfpack may need to pad their win total before ACC play, which is a strong possibility. The 'Pack play all non-league games at home, and the slate includes contests against FCS foe Richmond in Week 2 and Central Michigan in late September. East Carolina will also visit Raleigh. However, the season opener against Louisiana Tech is very dangerous, as the Bulldogs are coming off of a strong 2012. However, Sonny Dykes is no longer in Ruston. But La. Tech remains dangerous despite returning only six starters.

West Virginia: In addition to quarterback Geno Smith, the Mountaineers lost receivers Stedman Bailey and Tavon Austin, so head coach Dana Holgorsen catches a break by dealing with a soft non-Big 12 slate. WVU will play William & Mary and Georgia State as well as Maryland. The Terrapins could be primed to have a solid third season under Randy Edsall, whose offense should continue to improve. But it's not a daunting nonconference schedule for the Mountaineers.

Minnesota: The Golden Gophers are hoping to go back to the postseason after earning a bowl berth last season. Their 2013 campaign will start without many glitches as they open with UNLV, a road game at New Mexico State and a game against FCS foe Western Illinois. However, Jerry Kill's squad will face one of the best quarterbacks in the nation when the Gophers see David Fales and San Jose State. The Spartans went 11-2 last season but lost head coach Mike MacIntyre to Colorado.

Vanderbilt: The Commodores may not have a signature SEC win yet in the James Franklin era, but they continue to trend in the right direction. Vandy should be able to go through its non-SEC slate unscathed as it faces FCS foe Austin Peay, UAB, UMass and Wake Forest. The Demon Deacons will certainly be a test, but four nonconference wins are likely.

Ohio State: Another undefeated season could be on the horizon for the Buckeyes. Urban Meyer's squad has an easy nonconference slate beginning with the opener against Buffalo. OSU does play San Diego State and Cal, which won't be cakewalks, but Braxton Miller and Co. should be able to finish up the non-Big Ten slate 4-0 after a visit from FCS squad Florida A&M.

Alabama: After the Crimson Tide open wiith Virginia Tech, it will be smooth sailing in terms of non-SEC foes for Nick Saban's bunch. The Hokies should bounce back and be sound again on defense as Bud Foster gets nine starters back, but it's hard to imagine the Tide not pulling away in the second half of that contest. They also face Jim McElwain and Colorado State as well as Georgia State and FCS foe Chattanooga.

Louisville: Much like Ohio State, Louisville has a chance to go unbeaten this season, and the nonconference schedule is a big reason for that shot. Overall, the Cardinals have one of the easier all-around slates in the FBS because it plays in The American. In terms of nonconference games, Charlie Strong's squad opens with Ohio, which loses a lot of talent from a team that beat Penn State last fall. The Cardinals also play FCS foe Eastern Kentucky and travel to Lexington to battle in-state rival Kentucky, which is performing well off of the field on the recruiting trail but may be overmatched on the field for much of 2013. The Cards also face FIU, which is now being led by former Illinois head coach Ron Turner.

Note: New Auburn head coach Gus Malzahn gets all four nonconference games at Jordan-Hare Stadium, although Washington State will be a tricky opener. Arkansas State also visits and will be a difficult test despite yet another coaching change for the Red Wolves. But the Tigers also play FCS foe Western Carolina and Florida Atlantic.