Former Maryland starting quarterback Danny O'Brien will visit Ole Miss this week as the race to land the transfer's services heats up.

The former ACC newcomer of the year will meet with first-year Rebels head coach Hugh Freeze in Oxford from Tuesday to Thursday, according to a tweet from CBSSports.com's Bruce Feldman. Former Maryland starting left tackle Max Garcia will join O'Brien on the trip as the pair look to find a new program after receiving their releases from College Park. 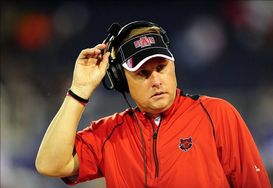 Could Hugh Freeze land Danny O'Brien in his first offseason at Ole Miss?

Both O'Brien and Garcia would be huge "gets" for Freeze as he looks to rebuild a program that struggled to compete in the SEC under Houston Nutt the last few seasons. But Ole Miss is just one team that would benefit from the two players, particularly O'Brien, who will be able to play immediately and has two years of eligibility remaining.

The former Terps starting QB would be a perfect fit at Wisconsin, as the Badgers are dealing with adversity under center because of a lack of healthy, experienced bodies at the position. New Badgers offensive coordinator Matt Canada could use a player of O'Brien's caliber as the team begins the post-Russell Wilson era. Wisconsin reportedly has amped up its efforts to land O'Brien in light of Jon Budmayr's health setback.

Another team that can certainly receive an instant boost from the 6-3, 215-pound O'Brien is Penn State, which has had issues under center the last few seasons.

New Nittany Lions head coach Bill O'Brien will oversee a three-way quarterback battle this spring between incumbent Matt McGloin, Rob Bolden and Paul Jones. But the PSU head coach confirmed that O'Brien has contacted the school and has an interest in playing at Happy Valley. Bill O'Brien will likely divide the spring reps between the three current combatants, but he's going to find out that the QB situation leaves a lot to be desired in State College. Landing O'Brien would be a real coup.

In his debut ACC season in 2010, the former Terp went 7-3 as a starter, passing for 2,438 yards with 22 touchdowns and eight interceptions. Running a pro-style offense, he looked poised to continue his success in College Park. However, a change in offensive philosophy hurt his development.

Maryland began running the spread under Gary Crowton after former OC James Franklin assumed the Vanderbilt head job, and O'Brien struggled a bit with his reads. It also didn't help that top receivers Torrey Smith and Adrian Cannon moved onto the NFL, leaving big voids at receiver. He passed for 1,648 yards with 10 interceptions and seven touchdowns in nine games, losing his starting job to C.J. Brown.

O’Brien’s high school coach, Todd Willert, said his former QB will visit schools during spring practice and make a final decision by mid-April. Wisconsin, Penn State and Vanderbilt have been considered the three favorites because they run a pro-style offense. With Freeze running a spread option at Arkansas State that works best with a scrambling quarterback, it will be interesting to see if O'Brien's interest is high after his visit in Oxford.

Currently four scholarship quarterbacks are competing this spring for the starting QB job at Ole Miss, including junior college transfer Bo Wallace, who is familiar with Freeze's offense after spending 2010 with the head coach at Arkansas State. He had a record-setting season at East Mississippi Community College in 2011 but has yet to take a snap at the FBS level. With O'Brien's discomfort in the spread at Maryland last fall, though, how viable is his interest in the Rebels?

We'll find out after he visits with Freeze and Co. this week.