Expect a healthy dose of Bell at Michigan State 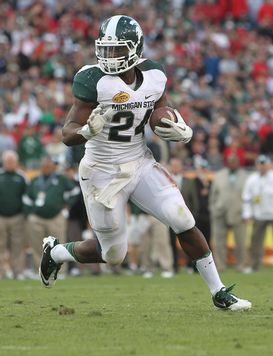 US PRESSWIRELe'Veon Bell ran for 948 yards and 13 touchdowns last fall.

The Spartans running back, who will see increased carries this fall with Edwin Baker departing early for the NFL Draft, will be central to the offensive game plan this season as the team looks toward a BCS berth.

While new starting quarterback Andrew Maxwell arrived in East Lansing as a highly rated recruit, head coach Mark Dantonio and his offensive staff know that relying on an effective rushing attack behind an offensive line that improved in the second half of 2011 will be crucial to getting the Spartans off to a strong start in their 2012 campaign, which begins August 31 at home against Boise State.

While Tennessee transfer DeAnthony Arnett, who had 24 receptions for 242 yards and two touchdowns last season, will provide a boost to a depleted receiver corps, the Spartans' offensive identity will begin on the ground. And it starts with the junior Bell.

The 6-2, 244-pound Ohio native was MSU's leading rusher in 2011, carrying the ball 182 times for 948 yards (5.2 yards per carry) and 13 touchdowns. He also proved his worth as a pass-catcher out of the backfield, as he was the Spartans' third-leading receiver with 35 grabs. His versatility is invaluable as MSU breaks in new faces on offense. And it's expected to be a unit with a run-first mentality. And why wouldn't it be, especially with a workhorse back like Bell and veteran Larry Caper running behind an experienced offensive line? Keep in mind that the senior Caper was the team's leading rusher in 2009, so he'll spell Bell when he needs a rest.

Fully recovered from a hamstring injury that dogged him this offseason, Bell will once again occasionally get split out wide or lined up in the slot because of his receiving skills. And that's a valuable trait to have in this offense, especially one that is looking for new playmakers to emerge.

Maxwell enters his fourth season in the program and possesses a strong and accurate arm, so he has the skill set to step in for Cousins and lead this offense. In the meantime, expect MSU to rely on Bell and a stout defense coordinated by Pat Narduzzi, who will land a head job sooner rather than later.

No matter where Bell is aligned on the field, he'll be one of the most productive players in the Big Ten. And if the Spartans develop a sound complementary aerial attack, they could be in position for their first Rose Bowl berth since 1988.