Expect Oregon to drag out a decision at QB

Less than a week ago I took a look at the tight quarterback battle taking place in Gainesville, where Jacoby Brissett and Jeff Driskel are competing for the starting job at Florida.

Another high-profile QB battle is occuring in Eugene, where Oregon head coach Chip Kelly is overseeing a tight competition over 22 practices between Bryan Bennett and Marcus Mariota for the right to replace Darron Thomas, who left the Ducks early to pursue his NFL dream.

Mariota, a redshirt freshman, looked like a steady veteran ready to lead one of the nation's most high-powered offenses in the team's spring game at Autzen Stadium. Granted, it's important to temper enthusiasm when it applies to spring contests. But the 6-4, 196-pound Hawaiian outplayed Bennett, completing 18 of 26 passes for 202 yards and one touchdown against one interception. The athletic signal-caller also rushed for 99 yards on five carries, which included an 82-yard touchdown sprint. Certainly, his dynamic playmaking ability was on display after a spring in which Kelly was able to keep the QB duel under wraps. Mariota also looked comfortable on rollout passes, had good touch on his throws and looked confident in the huddle and in control while running the Ducks' high-octane, up-tempo attack. 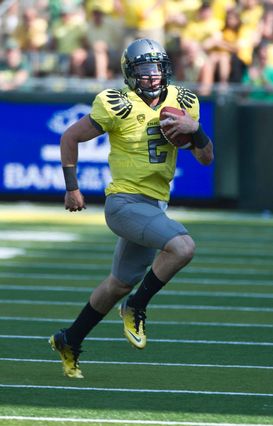 US PRESSWIREBryan Bennett has the edge in experience over Marcus Mariota.

Bennett, however, didn't do anything in that contest to fall behind in this battle. Hence, the equally athletic signal-caller remains on par this fall with Mariota. The sophomore completed 19 of 32 passes for 209 yards and one touchdown against two interceptions. But he never seemed to get going on the ground, recording 57 yards on 18 carries. He was also sacked three times for 30 lost yards, so he only netted 27 yards on the ground.

While Bennett is actually more athletic than Thomas, who started the last two seasons, Mariota's playmaking ability as a runner stood out even more. But it's important to keep in mind that Bennett has the edge in playing experience after stepping in and performing very well for an injured Thomas last fall. He threw six touchdown passes with no interceptions and rushed for 200 yards on just 23 carries in 2011. His completion percentage of 54.3 won't be good enough for this offense, though, and he looked a little hesitant throwing the ball in the spring game. Mariota looked like the more polished passer, and that may ultimately help him win the job when coupled with his elite running skills. But no matter who is under center, he will give the Ducks even more production on the ground than in years past.

Kelly and offensive coordinator Mark Helfrich certainly have a difficult decision to make. But it's a decision that is not expected to come anytime soon. All that is expected is that one of two talented signal-callers will take the first snap in the September 1 opener against Arkansas State. After that, it's anyone's guess. In fact, because Kelly has practices and scrimmages closed to the fans and media, there will be plenty of guessing games over the next few weeks.

Kelly has stated that he would not dismiss the idea of playing both quarterbacks, though he does expect a winner to emerge in this battle. While he's looking for the usual characteristics in his starter — ball protection, efficiency through the air and on the ground, leadership skills, etc. — don't expect an announcement on the starter until just about a week before camp breaks. I wouldn't even be surprised if Kelly dragged it out until mere days before the opener.

Until then, the debate rages on.