The 2013-14 college football bowl season kicks off on Saturday with four games, including the Famous Idaho Potato Bowl between San Diego State and Buffalo in Boise.

Here are some things to keep an eye on when you're tuned into the contest between the Aztecs and the Bulls.

The Aztecs were able to rally from a dreadful 0-3 start (including a 21-point loss to FCS Eastern Illinois) to win seven of their next nine games to finish 7-5 and make the postseason. Is this the year that the Aztecs win a bowl game for head coach Rocky Long, who is 0-2 in the postseason at SDSU (losses to Louisiana-Lafayette in the 2011 New Orleans Bowl and BYU in last year's Poinsettia Bowl)? 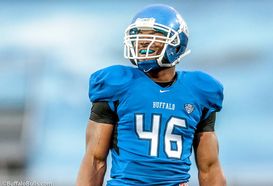 Khalil Mack had nine tackles, 2.5 sacks and a Pick-Six in a loss to Ohio State.

The Bulls, meanwhile, are making their second bowl appearance in their 15th season in the FBS. Head coach Jeff Quinn put together a strong fourth season with the Bulls, and a lot of the team's success has been because of a strong defense led by outside linebacker Khalil Mack, who was a Butkus Award finalist and is projected to be a first-round pick in the upcoming NFL Draft. But Mack isn't the only standout defender. It is a deep unit that also features standout outside linebacker Adam Redden and strong safety Okoye Houston.

The turnover battle: As in any game, protecting the football will be key. But taking a look at the turnover numbers for these teams this season, it is especially crucial in this one. The Aztecs are tied for 118th in turnover margin, while the Bulls are tied at No. 4 in the nation in that category. Former walk-on quarterback Quinn Kaehler will have to protect the football for SDSU, but he will have to adjust to Buffalo's 3-4 front. I would expect the Aztecs to try to control the line of scrimmage early with running backs Adam Muema and Donnell Pumphrey. But the SDSU offensive line has struggled all season.

The best player on the field: While the Bulls' defense is deep as I mentioned, Mack remains the best of the bunch. The MAC defensive player of the year, who had nine tackles, 2.5 sacks and a Pick-Six in a loss to Ohio State in September, has recorded 94 tackles (19 for loss), 10.5 sacks, three interceptions and five forced fumbles this year. He holds the FBS record with 16 career forced fumbles and is one tackle for loss away from setting the FBS career mark with 75. He also leads a defense that ranks in the Top 10 in red zone defense.

Odds and ends: The Aztecs are favored by one point ... The Bulls have never won a bowl game, losing to Connecticut in the 2009 International Bowl in their only other postseason appearance ... Aztecs receiver Colin Lockett has 355 yards and four touchdowns in his last four games ... Buffalo running back Branden Oliver has 1,421 rushing yards and 15 touchdowns on the year, including five games of over 150 yards and two with at least 215 yards.