Cam Newton and Auburn did it again.

ICONCam Newton and Auburn remain unbeaten after their wild win over Alabama.

Facing a 24-point deficit on the road in the Iron Bowl, the Tigers rallied for a 28-27 victory to pass perhaps their biggest hurdle on the road to the BCS national championship game.

Alabama backup quarterback A.J. McCarron could not move the Crimson Tide into field-goal range for a potential winning score in the final minute after starter Greg McElroy was knocked out of the game with an apparent concussion after being hit hard on a corner blitz.

Newton, who finished with 216 passing yards and three scores, finally gave the Tigers the lead when he hit tight end Philip Lutzenkirchen wide open in the end zone with 11:55 remaining. The touchdown came after a couple of big runs by Newton and running back Mike Dyer, as well as a clutch pass by the signal caller on a 4th and 3 earlier in the drive.

The Heisman Trophy contender hooked up with receiver Terrell Zachery for a 70-yard score on the first possession of the second half to cut the Crimson Tide's lead to 24-14, then he scored from one yard out to cut the deficit to three.

Earlier in the half after the Tigers fumbled a catch on a punt return to give the ball right back to the Tide, the Auburn defense stiffened and held Alabama to just a field goal. Newton then led a touchdown drive that culminated in the Lutzenkirchen touchdown reception.

Alabama played much of the second half without receivers Julio Jones and Darius Hanks, who were sidelined with injuries.

After being dominated by the Tide's defensive line for much of the game, the veteran Auburn offensive line played much better in the second half, which was one of the bigger keys to the comeback victory.

It could have been a lot worse.

In the Iron Bowl, Alabama leads Auburn 24-7 at the half in Tuscaloosa behind McElroy, who finished the first half 19-of-23 passing for 335 yards and two scores. 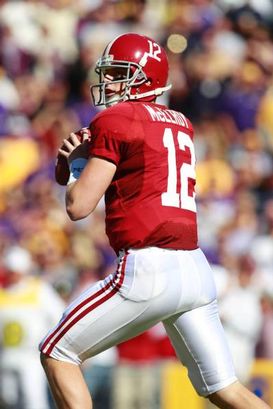 ICONAlabama QB Greg McElroy had one hell of a first half against Auburn.

The Tigers, who notched their only score when Newton found receiver Emory Blake down the field for a 36-yard touchdown, have been helped by two Alabama turnovers deep in Auburn territory.

First, running back Mark Ingram peeled off a huge run before the ball was punched out and rolled out of the back of the end zone for a touchback. Then, after the Tide settled for a field goal following a certain dropped touchdown catch by running back Trent Richardson on its next possession, Auburn DT Nick Fairley sacked McElroy deep in Tigers territory to force and recover the fumble. Auburn, however, was unable to move the ball for another score with a minute left in the half.

As I mentioned in the Auburn-Alabama preview today at the NFP, the Crimson Tide have been intent on giving the Tigers a lot of different looks on offense, just as they did on their opening possession when they promptly went down the field and scored to make it 7-0.

Fairley, who returned to the game after briefly leaving with a nagging left shoulder injury, was NOT in the game when Ingram dashed up the middle on his 9-yard scoring run, and he was also out when McElroy tossed a 68-yard touchdown to a wide-open Jones to make it 14-0 following Auburn's three and out on its opening possession.

Three plays without Fairley, two touchdowns for the Tide.

Auburn then had yet another three and out before the Tide made it 21-0 on a Hanks 12-yard scoring reception.

Stat of the half: Auburn has negative-10 yards rushing. Email dave.miller@nationalfootballpost.com or follow me on Twitter at Miller_Dave