Of course, we're all awaiting the final BCS national championship game between Florida State and Auburn. But there are a lot of other intriguing matchups as well. Below, I have picked out five games that seemingly are going under the radar.

This list, of course, does not include any BCS games because those are typically (or should be) some of the best games. It also doesn't include the Chick-fil-A Bowl in Atlanta between Duke and Texas A&M, which should be a better game than most expect. But any game with Johnny Manziel, of course, needs no additional hype. 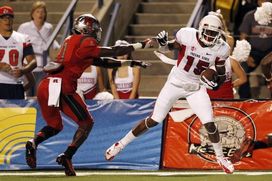 US PRESSWIREDavante Adams is part of a high-powered Bulldogs offense.

The MWC champion Bulldogs certainly were disappointed to fall short of their BCS-crashing dreams, but Tim DeRuyter's squad will still be focused when they face a Trojans team that was able to right the ship and win six of its final eight games following the dismissal of Lane Kiffin. Sure, Ed Orgeron is no longer roaming the sidelines. But this team should still play hard (despite players being disappointed over Orgeron's departure) for Clay Helton, the offensive coordinator/interim head coach who will step aside after the game and give way to former Washington head coach Steve Sarkisian. The Trojans will be tasked with stopping a Bulldogs offense, led by star quarterback Derek Carr and receivers Davante Adams, Josh Harper and Isaiah Burse, that ranks first in the nation in passing yards per game, third in total offense and fifth in scoring. The Trojans' defense, however, ranks 16th in the country in total yards per game. Can 'SC match up if this game turns into a shootout? Fresno State, which has lost four straight bowl games, beat USC 24-7 in the 1992 Freedom Bowl.

We'll have our final chance to watch Heisman Trophy finalist Jordan Lynch in a Huskies uniform after an incredibly productive college career. The dual-threat signal-caller accounted for 45 touchdowns on the ground and through the air this season, but he was unable to carry the Huskies to a BCS berth due to the team's loss to Bowling Green in the MAC title game. However, a win would give NIU its first 13-win season in school history. Meanwhile, Matt Wells had a successful first season as the Aggies head coach after taking over for Gary Andersen, who is completing his first season at Wisconsin. Despite losing star quarterback Chuckie Keeton in the middle of the year, the Aggies made it to the MWC title game in their first season in the league and gave Fresno State fits in that championship game. Utah State's strength is its defense, as the unit ranks seventh nationally in scoring defense and 10th in rushing defense. Linebackers Jake Doughty and Zach Vigil will have their hands full stopping Lynch on the ground. As a whole, NIU's offense averages 41.6 points and 312.5 rushing yards per game.

The Yellow Jackets had an opportunity to beat in-state rival Georgia in the regular-season finale, but they were unable to close the deal after blowing a 20-0 lead. Early in the year, it appeared that quarterback Vad Lee would be able to push the ball down the field and add another dimension to Paul Johnson’s option offense. But he almost lost his starting job after struggling through a losing streak, and he finished with just three passing touchdowns in the team's final nine games. The Yellow Jackets did rush for 45 touchdowns, however, and Jeremiah Attaochu (12 sacks) led a much improved defense. Meanwhile, the Rebels battled their way through depth and injury issues to go bowling for the second time in as many seasons under head coach Hugh Freeze. Ole Miss ranked fifth in the SEC in yards per game, and quarterback Bo Wallace gave this unit a stronger presence under center despite his subpar play in the final two games of the season. If you haven't seen receiver Laquon Treadwell (67 receptions for 557 yards and five touchdowns) and left tackle Laremy Tunsil (nine starts) yet, be sure to watch the two star freshmen. They were part of the Rebels' outstanding 2013 class.

US PRESSWIREMark Weisman and the Hawkeyes are always tough when they run effectively.

Hawkeyes head coach Kirk Ferentz did a wonderful job of coaxing eight wins out of his team one season after going 4-8. The defense and ground attack (running backs Mark Weisman, Damon Bullock and Jordan Canzeri) led the way, making this the prototypical Ferentz squad. The Hawkeyes were competitive even in their losses, and they closed the season with wins over brand names Michigan and Nebraska. UCLA may have the best crop of young linebackers, but the Hawkeyes arguably have the best group of seniors in James Morris, Christian Kirksey and Anthony Hitchens. They will be tested by a Tigers team that remains strong on the ground but will be breaking in a new starter at quarterback. Dual-threat Anthony Jennings will be under center because Zach Mettenberger tore his ACL during the Tigers' season-ending win against Arkansas. Jennings will have top weapons, though, in Jarvis Landry (1,172 yards and 10 touchdowns) and Odell Beckham (1,117 yards and eight touchdowns) at receiver. But I would expect a run-heavy attack with Jeremy Hill and Terrence Magee because I'm not sure if Jennings is ready as a passer despite having the 49-yard touchdown toss to Travin Dural in the final minutes against the Razorbacks in his back pocket.

Perhaps college football fans have taken notice of this non-BCS matchup. But in terms of buzz on Twitter, television and radio, the matchup between the Cowboys and the Tigers seems to be going under the radar a bit. And that's a shame. The Cowboys and the Tigers both failed to win their conferences on the final day of the regular season, but they still had fantastic seasons. The former Big 12 rivals now meet in Big 12 country two days after the New Year. While the Pokes and the Tigers have been known for their offenses in the past, the defenses have been the calling cards for both teams in 2013. Still, OSU has averaged 40 points per game while Mizzou has put up 39 points per contest. The big question is whether senior quarterback Clint Chelf, who sparked the Pokes' offense in the last month of the season, will be able to put behind his subpar effort in the loss to Oklahoma. He'll face a strong Mizzou pass rush led by Michael Sam.

Others that are going under the radar