It’s a lot to handle, and you may not be able to see every game if you have a significant other who would prefer to Christmas shop or watch the latest installment of The Real Housewives.

So with that in mind, here are the five games to catch this bowl season if you are forced to pick and choose. I know, it hurts. 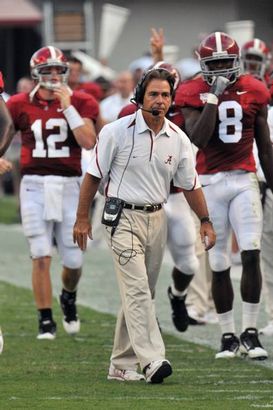 ICONNick Saban will face his former team in the Capital One Bowl.

A lot of discussion has centered on how motivated the Crimson Tide will be after suffering three losses and being shut out of the BCS party. The defending national champs are coming off of a crushing loss in the Iron Bowl, and some are concerned that the team will overlook the Spartans. I disagree.

This feels like a real bad spot for the Spartans, and as good of a season as they have had I can’t help but think back to the debacle in Iowa City. The Tide’s veteran offensive playmakers will be a real test for Greg Jones and the Spartans defenders.

Mark Dantonio certainly has had a memorable season, dealing with a health issue off the field and making two of the gutsiest calls of the season with the “Little Giants” play against Notre Dame and “Mousetrap” trick against Northwestern. Like its coach, MSU overcame a lot of adversity this season, so they should give the Tide a great effort.

The Buckeyes exorcised some BCS demons with their performance against Oregon last season in the Rose Bowl. But this Arkansas team under Bobby Petrino is much tougher than its given credit for, and the improvement on defense this season is a big reason why the Razorbacks earned a BCS bowl berth. We know about quarterback Ryan Mallett, but tailback Knile Davis has given an already strong offense the balance to compete against any team in the country.

Meanwhile, this is a great runner-up prize for the Buckeyes, who were unable to land the spot in the Rose Bowl. Quarterback Terrelle Pryor, who recently boasted that he’d “dominate the nation” if he played in a spread offense, will try to help the Buckeyes put an end to their nine-game skid against SEC teams. Ohio State fell in its toughest game of the season — at Wisconsin — and Jim Tressel’s squad certainly has a tough matchup in New Orleans on Jan. 4.

How about the turnaround at Virginia Tech?

After the emotional season-opening loss to Boise State, the Hokies came out flat the following week and fell at home to FCS foe James Madison. Since then, however, they have rattled off 11 straight victories behind quarterback Tyrod Taylor’s dynamic play and an emerging defense under Bud Foster.

The Hokies, though, will face their biggest test since Kellen Moore and Boise State when they try to defend battle-tested Stanford quarterback Andrew Luck. Luck, the closest thing to Peyton Manning in the college game, leads a Cardinal offense that ranks No. 8 in the country in scoring at 40.3 points per game. Not only can Luck air it out, but Stepfan Taylor has been impressive on the ground taking over for the departed Toby Gerhart.

While the offense has been very impressive, it’s been the Cardinal defense under first-year coordinator Vic Fangio that has been the real difference. Stanford has pitched three shutouts this season — all in conference play — under the leadership of the longtime NFL assistant. What will he have in store in an effort to contain Taylor?

ICONNick Toon and the Badgers will battle TCU in the Rose Bowl.

The nation’s other unbeaten team, TCU, takes center stage in The Granddaddy of Them All — the Rose Bowl. It would have been great to see the Horned Frogs get a shot at either Auburn or Oregon, but Wisconsin may be the best one-loss team in the nation. And the Badgers boast a balanced offense that will pose problems for Gary Patterson’s bunch.

As great as the Badgers have been on the ground, quarterback Scott Tolzien made huge strides under center in 2010. He led the nation with a 74.3 completion percentage and ranked fourth nationally in pass efficiency rating. And his play-action game was perhaps second only to Alabama’s Greg McElroy.

Wisconsin seeks its fourth consecutive victory in the Rose Bowl after capturing titles in 1994, 1999 and 2000.

Can Auburn quarterback Cam Newton be stopped? It hasn’t happened as of yet this season — 13 games and counting. Oregon may be the more balanced team, but the Ducks don’t quite have the Heisman Trophy winner — as good as LaMichael James may be. I don’t think Oregon has faced quite the sophisticated offense as Gus Malzahn’s unit. And the real threat to me now is Newton’s arm.

Oregon has the No. 1 scoring offense in the nation, averaging 49.3 points per game. But they are not too shabby defensively, allowing just 18.4 points per game. You think Auburn’s defense steps up in the second half? Defensive lineman Brandon Bair, linebacker Casey Matthews and Co. have allowed just 24 fourth-quarter points all season.

Auburn, which has been burned by the big play in the passing game all season long, has been equally impressive in the second half. Defensive tackle Nick Fairley and Co. have held their last two opponents, South Carolina and Alabama, to a total of two field goals after halftime.

Certainly, an argument can be made for either team to finish the season unbeaten. But it’s hard to argue against Mr. Heisman.