Five players on the spot in Week 12

Here are five players who will be on the spot during Week 12 of the 2012 college football season.

And, in case you missed it this week at the NFP, check out what Stanford's defense has to do in order to contain Oregon's high-octane offense in a national marquee matchup on Saturday night.

1. Stanford QB Kevin Hogan: The redshirt freshman has exhibited compusure when he has been on the field this year, but the dual-threat quarterback will face a big test Saturday night at Autzen Stadium against top-ranked Oregon. The athletic 6-4, 224-pound signal-caller led six consecutive scoring drives, including five for touchdowns, and completed 18 of 23 passes for 184 yards with 48 yards on the ground in a 48-0 rout of Colorado after replacing an ineffective Josh Nunes. And in his first career start last week, Hogan went 22 of 29 through the air for 254 yards (with 49 more yards on the ground) and three touchdowns against two interceptions in a 27-23 comeback victory against Oregon State. Protecting the football will be a priority, especially because the forecast calls for rain. But look for the Cardinal to utilize the read-option play against a banged-up Ducks defense to complement the power run game of Stepfan Taylor. Stanford will try to dictate the tempo with its rushing defense and ground game, but Hogan will certainly have to make some plays through the air in order to give the Cardinal a chance to spring the upset. Keep an eye on the Ducks' pair of safeties, as they both are replacing starters who are out for the season.

2. UCLA LB Anthony Barr: In order for the Bruins to knock off city rival USC this weekend, the improved Bruins defense will have to contain the Trojans' dangerous passing attack led by quarterback Matt Barkley and paced by receivers Marqise Lee and Robert Woods. UCLA has done a great job of disguising its weaknesses in its secondary by utilizing a lot of stunts and various blitzes, but the veteran Barkley should be able to adjust in his pre-snap reads and hit some big plays. The key for the Bruins is to generate a pass rush by not bringing extra defenders or at least cause a turnover or two when they do bring extra pressure. This fall, the former fullback Barr has emerged as a legitimate Pac-12 defensive player of the year contender in just his first season at the position. He leads the conference with 11 sacks and is tied for the conference lead in tackles for loss with 17. He has recorded a sack in eight of 10 games and will need to be at his best (as he was in the loss to Oregon State when he had three tackles for loss, two sacks and a forced fumble) if the Bruins want to knock off the Trojans and get into the Pac-12 title game. 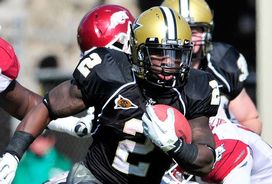 Vandy's Zac Stacy is one of the more underappreciated backs in America.

3. Vanderbilt RB Zac Stacy: The senior tailback is probable for the Commodores' home game against Tennessee after suffering a leg injury last week against Ole Miss. Vanderbilt head coach James Franklin hasn't revealed much about Stacy's current condition, but the running back practiced Wednesday and is likely to give it a go. There's no question that the 'Dores have depth in the backfield with Wesley Tate and Brian Kimbrow able to contribute. And Vandy could still move the ball on the Vols the way Sal Sunseri's defense has played all year, but it would be much more difficult without Stacy, who leads the Commodores with 769 rushing yards. He is known for playing through injuries, so expect him to be on the field. But how effective will he be?

4. Baylor RB Lache Seastrunk: Remember Seastrunk? He was one of the players at the center of the Willie Lyles controversy at Oregon. After transferring to Waco, he has finally emerged as a top option for Art Briles and Co., and he could play a major factor in determining whether Kansas State remains undefeated after this weekend. Essentially Baylor's new No. 1 back, he recorded three touchdowns last week in a loss at Oklahoma. And he could be an X-Factor in this offense, especially if quarterback Nick Florence can find him as a pass-catching weapon out of the backfield. K-State's front seven is very good, led by linebacker Arthur Brown. But the Wildcats will still be without Tre Walker. Seastrunk's speed could give Bill Snyder's squad problems. Briles would be wise to make him a big part of the offense Saturday.

5. Wisconsin QB Curt Phillips: The Badgers have won nine straight games in November, and head coach Bret Bielema is 19-3 in the month. The team just ran for a school-record 564 yards in a 62-14 win at Indiana, and Montee Ball should snag the NCAA career touchdown record. Wisconsin's rushing attack is most certainly in its best shape of the season, but Phillips must be able to move the ball through the air against Ohio State. Phillips, who made his first career start at Indiana last week, only threw the ball seven times against the Hoosiers. Expect OSU to load the box in an effort to thwart the Badgers' rushing attack. And while Ball and James White should be able to get their yards, I don't think Wisconsin could hand Ohio State its first defeat without making some plays through the air.