Five players on the spot in Week 2

Miami (FL) QB Stephen Morris: There's no question that Duke Johnson has to be able to run the football with some success for the Hurricanes to have a chance against Florida. The 'Canes can't afford to be in too many third-and-long situations against Will Muschamp's defense. But it's also imperative that Morris is able to make some big plays down the field against one of the best secondaries in the nation while facing pressure from an aggressive front. Morris has the weapons at receiver such as Phillip Dorsett, Herb Waters and Allen Hurns, but the Gators will counter with Marcus Roberson, Loucheiz Purifoy, Jaylen Watkins and a deep stable of cornerbacks. 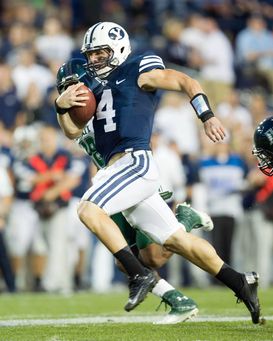 US PRESSWIREBYU quarterback Taysom Hill must be efficient and turnover-free against Texas.

BYU QB Taysom Hill: The dual-threat signal-caller had a disastrous game for the Cougars at Virginia last week, as he was just 13 of 40 passing for 175 yards with an interception while being harassed by the Cavaliers defense all day in the loss. However, the playing conditions were sloppy, star receiver Cody Hoffman wasn't on the field and the other receivers dropped a lot of balls. This week, he will face a Texas defense that welcomed back Jordan Hicks and Jackson Jeffcoat last week after injuries derailed the pair of Longhorns last year. The Cougars' defense will have to keep them in this one, but Hill must be efficient, turnover-free and be able to make plays with his legs as well.

San Jose State QB David Fales: The Spartans travel to Palo Alto to battle Stanford as the Cardinal open up their new season. The senior signal-caller is coming off of a season in which he threw for 4,193 yards and 33 touchdowns against nine interceptions while completing 72.5 percent of his passes. He didn't have a bad game last year against the Cardinal, but he threw an interception to Ed Reynolds late in the game to seal a Stanford win. He'll be facing perhaps an even nastier Cardinal defense this time around, but we'll see if his experience last year bodes well for the Spartans.

Auburn QB Nick Marshall: The new starting quarterback on The Plains was 10 of 19 passing for 99 yards last week against Washington State, numbers that won't wow anyone. But he had zero turnovers, and that's huge considering he had 20 interceptions last year in junior college. But Marshall didn't always look comfortable running Gus Malzahn's offense, and his passes weren't crisp. The Tigers will need to score points against an Arkansas State team that had four different rushers with over 100 yards in the season opener.

Georgia's offensive line: Much has been made of Aaron Murray's struggles against Top 15 teams, as the veteran Bulldogs signal-caller is just 1-9 against Top 15 foes. Sure, he had an interception and a lost fumble last week in the loss to Clemson, but on several drives Murray also didn't have much time to complete his reads and get the football out of his hands because the Bulldogs' offensive line was manhandled at times by Clemson's active front. The task doesn't get any easier for the 'Dawgs this week, as Jadeveon Clowney, Chaz Sutton and South Carolina come to Athens. Murray is a rhythm passer who needs his offensive linemen, specifically tackles Kenarious Gates and Kolton Houston, to help him out. I wouldn't expect offensive coordinator Mike Bobo to leave those two out on an island very often.