Five players on the spot in Week 5

Ohio State QB Braxton Miller: All indications are that the fifth-place finisher in last season's race for the Heisman Trophy will be back as the Buckeyes' starting quarterback after sitting out the past two weeks and missing almost all of the previous game with a sprained knee. The Buckeyes host Wisconsin in their Big Ten opener at Ohio Stadium, and it will be interesting to see if Miller has to shake off any rust early in the game. Kenny Guiton filled in beautifully while Miller was shelved, so head coach Urban Meyer knows that he could go back to the "hot hand" if Miller struggles at all. As it is we likely will see Guiton in the game at some point after the redshirt senior earned back-to-back Big Ten offensive player of the week honors. I expect Miller to remain the starter, but will more intrigue ensue Saturday night if he is at all shaky?

Arizona RB Ka’Deem Carey and Washington RB Bishop Sankey: The two best running backs in the Pac-12 square off Saturday in Seattle, as the Wildcats and the Huskies meet in a key Pac-12 clash. Carey is averaging 149.5 rushing yards per game, while Sankey is at 148.7. And both are gaining nearly 7 yards per rush and have four scores on the ground. The Huskies have the edge at quarterback with Keith Price, so Carey will be a big factor in whether Rich Rodriguez's squad could steal a road win in what will be a raucous environment. 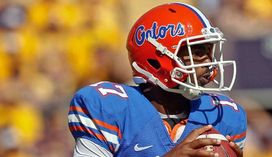 US PRESSWIRETyler Murphy is finally the No. 1 QB in Gainesville.

Florida QB Tyler Murphy: With Jeff Driskel lost for the season with a broken fibula, Murphy will now have to run the offense for the first time in his Gators career after being buried on the depth chart the last three years. He considered transferring and never wanted to change positions, and he now is finally the No. 1 QB in Gainesville. Defense and special teams will be leaned on with Murphy's inexperience against a brutal upcoming schedule, but the new starting signal-caller still needs to be productive, efficient and turnover-free as well. He'll have a chance to get his feet weet as a starter this week against Kentucky, but it is in Lexington.

Ole Miss RB Jeff Scott: If the Rebels are going to beat Alabama at Bryant-Denny Stadium and notch their third impressive road victory of the young season, Scott needs to be productive on the edges against the Crimson Tide defense. Quarterback Bo Wallace has to play turnover-free, and Scott needs to resemble the running back that is averaging 9.4 yards per carry. Even if he finds difficulty running against the 'Bama front, Scott can be a weapon on special teams or lined up in the slot. I expect Rebels head coach Hugh Freeze to line him up all over the field in hopes of finding a mismatch against the Nick Saban and Kirby Smart defense.

TCU RBs Waymon James and B.J. Catalon: Another pair of running backs makes this week's list because of their importance to a Horned Frogs offense that has not been in sync all season long. With Casey Pachall hurt, Trevone Boykin is the No. 1 QB. But neither Pachall nor Boykin has really looked comfortable this year, and it doesn't really seem as if TCU has an offensive identity after three contests. When a team has two backs such as James and Catalon, that needs to be the focus. The Frogs, after establishing the run, can then take advantage of Boykin's athleticism. It just seems as if they are trying to force Boykin to be a traditional passer, which he isn't.