Five players on the spot in Week 6

Illinois QB Nathan Scheelhaase: Besides perhaps Zach Mettenberger — although he closed strong in 2012 — no other quarterback in the country has been more impressive under a new offensive coordinator than Scheelhaase. Head coach Tim Beckman's hire of Bill Cubit has really worked wonders for the senior signal-caller, who has had a rollercoaster career in Champaign because of the rotating door at OC. Scheelhaase is operating an offense that is putting up 478.5 yards per game, which ranks No. 35 nationally, and the QB leads the Big Ten at 290.5 passing yards per game and in efficiency rating at 174.8 this fall. However, Scheelhaase was exposed against Washington in the game at Chicago's Soldier Field, as he went just 9 of 25 through the air with one touchdown and one interception. In his other three games, he completed at least 70 percent of his tosses. He will be going up against a young Nebraska defense that has given up its fair share of yards in 2013, so he is expected to start Big Ten play with a strong game. 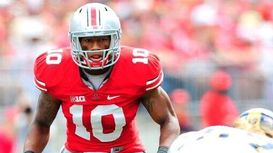 US PRESSWIRERyan Shazier will be leaned on as the Buckeyes look to contain the balanced Wildcats offense.

Ohio State LB Ryan Shazier: The Buckeyes returned only one starter to their front seven this season, and that was Shazier. His play was a big key to the Buckeyes containing Wisconsin's prolific rushing attack last week, and he has been steady all year. He leads the team in tackles with 37 (seven for loss) and has two forced fumbles. He can go east to west and is a very effective pass rusher as well. Strong play from Shazier will be needed as the Buckeyes look to contain the Northwestern offensive attack, which is very balanced.

Washington RB Bishop Sankey: Remember when the Huskies played host to Stanford last season and pulled the upset? Sankey rushed for 144 yards, including the key 61-yard scamper for a score on a 4th-and-1 play, against the Cardinal that propelled the Huskies to a 17-13 victory. This season, Sankey is averaging 5.8 yards per carry and leads the nation in rushing yards per game (151.8). If the Huskies are going to pull off the win on The Farm and give head coach Steve Sarkisian a program-defining victory, Sankey will need to be as productive as he has been all year.

Notre Dame QB Tommy Rees: The Fighting Irish finally started to miss Everett Golson in the team's loss last week to Oklahoma. Rees threw three interceptions that led to Sooner touchdowns, although the first pick was off of a bust on the offensive line and the second was a tipped ball off the hands of TJ Jones in good coverage. The third one, however, was a badly forced football when the Irish were driving. Rees sometimes struggles to get off of his first read, and while he played well last season it was primarily in shorter spurts in relief of Golson. We'll see how Rees fares against Arizona State's fierce front at AT&T Stadium in Arlington, TX. It will be difficult for him to avoid pressure because of his limited athleticism. Will we see more Andrew Hendrix against the Sun Devils?

Tennessee QB Justin Worley: The Volunteers' starting quarterback will face a Georgia pass defense that has given up nine passing touchdowns on the year. If Butch Jones and the Vols have any chance for an upset on Rocky Top, Worley has to play his best and push the ball down the field against a susceptible secondary that has allowed an average of 277 yards per game and likely will be without safety Tray Matthews due to a hamstring injury. Worley has completed 56 percent of his passes and tossed eight touchdowns, but he has also thrown six interceptions. Are the Bulldogs due for a letdown after their emotional win over LSU last week?