Five players on the spot in Week 8

Missouri RB Maty Mauk: With James Franklin out for about three to five weeks with a separated right shoulder, the Tigers' chances in the SEC East race will rest on the arm of Mauk, the redshirt freshman who takes over the starting duties at quarterback. Mauk's first college start will be against Florida, which boasts the top-ranked defense in the SEC. He didn't need to do a whole lot when he came in against Georgia last weekogs, but he did complete all three of his passes for 23 yards. He entered last week with just three career pass attempts for 18 yards. However, the spotlight is much brighter against a fierce Gators defense. Expect head coach Gary Pinkel to get Mauk comfortable early with more conservative play-calling, hoping the UF defense loosens up a bit. If the Tigers can get Mauk comfortable, he has a plethora of playmakers to work with such as L'Damian Washington and Dorial Green-Beckham, who have combined for 854 receiving yards and 11 touchdowns. The good news for Mizzou is that this game is at home, and the UF offense won't make this a shootout either. Mizzou also has three running backs with at least 350 yards on the season, so the run game could be his best friend if there is room to run. It's a tough test, no doubt, so offensive coordinator Josh Henson will have to have a sound game plan.

Iowa LB James Morris: The Hawkeyes enter this game with the No. 9 total defense in the country, and a big part of that defensive effort has been led by Morris, who has three interceptions and a forced fumble as well as four tackles for loss. Kirk Ferentz wants to shorten this game up and play smashmouth football, and the weather could be more November-like than that of October. These teams have two of the best rushing offenses and rushing defenses in the country, so Morris will be key in helping the Hawkeyes slow down Buckeyes running back Carlos Hyde and quarterback Braxton Miller, who looked sluggish on the ground the last time we saw him against Northwestern. However, Hyde was a load against the Wildcats, scoring three touchdowns. The Hawkeyes have defeated either an 11-win team or one that made a BCS game for six consecutive years, but it will be difficult to do against a Buckeyes team that has won 18 straight games and are coming off of a bye week. Morris, though, will try to lead the way. 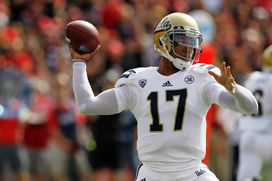 US PRESSWIREBrett Hundley threw for 410 yards and three touchdowns in the Bruins' 37-10 victory over Cal last Saturday night.

UCLA QB Brett Hundley: The Bruins have a chance to show the nation that they belong in Oregon/Stanford territory with a win in Palo Alto one week after the Cardinal were upset at Utah. Although Derek Mason's defense is only ranked No. 48 nationally at 379.7 yards per game, this is still a tough spot for Hundley and the Bruins. The redshirt sophomore signal-caller had the most prolific passing performance of his career, throwing for a career-high 410 yards and three touchdowns in the Bruins' 37-10 victory over Cal last Saturday night. But he'll be facing a defense that is salty after slipping up against the Utes.

Notre Dame QB Tommy Rees: The Fighting Irish enjoyed a bye last week and will host a revived USC squad under the lights in South Bend. Rees has become a major question mark at quarterback because of his propensity to turn the football over. He also has had a 45 percent completion percentage or below in his last three games. Trojans interim head coach Ed Orgeron has his team playing loose and having fun, and it will be interesting to see if coordinator Clancy Pendergast's defense can hold up for a full 60 minutes. Rees has struggled with his accuracy and taking care of the ball in recent weeks, and his best friend will need to be a sound rushing attack. But will Brian Kelly and offensive coordinator Chuck Martin make the ground game a priority?

Clemson DE Vic Beasley: The defensive star for Dabo Swinney's squad cracked my "Others to Watch" portion of my Heisman Watch list this week, as he has been a consistent beast all season long for the Tigers. The junior leads the nation with nine sacks and had a touchdown on a fumble return last week in the win over Boston College. He is a phenomenal pass rusher and plays the run well, too, as he has 12 tackles for loss on the year. Throw in his two forced fumbles and five pass breakups, and Beasley could become Florida State quarterback Jameis Winston's worst nightmare Saturday night in Death Valley, where the Seminoles have not won since 2001.