Five players on the spot in Week 9

Here are five players who will be on the spot during Week 9 of the 2012 college football season.

And, in case you missed them this week at the NFP, check out the keys to the game for Georgia and Notre Dame in their marquee matchups on Saturday.

1. Mississippi State QB Tyler Russell: Russell is having a fantastic season in his first year as the full-time starter in Starkville. The 6-4, 220-pound junior has thrown 15 touchdown passes against just one interception, but he has not faced a defense quite like the one he will see on Saturday against Alabama. He will need to continue to make good decisions with the football, and that includes his pre- and post-snap reads. Alabama head coach Nick Saban and defensive coordinator Kirby Smart are known for their complex coverages, showing one look and then switching it up right before the snap. Russell must know where safeties Robert Lester and Ha Ha Clinton-Dix are at all times or else things could be problematic for the Bulldogs' offense.

2. Oklahoma QB Blake Bell: It will be interesting to see how Oklahoma's offense fares against Notre Dame's stout front seven when the Sooners are in the red zone on Saturday night. We saw Notre Dame snuff out a Stanford game-ending drive a few weeks ago, as Cardinal running back Stepfan Taylor was unable to get into the end zone in the Irish win. But OU's goal-line offense has been on fire, with the power run game being very productive for the Sooners. And Bell, the backup to Landry Jones at quarterback, has had a huge role. In the "Belldozer" package, the signal-caller uses his power to push through after initial contact. But he's very patient as well, as he reads his blocks well behind a wall that sometimes consists of six offensive linemen. OU hasn't faced a front seven such as Notre Dame's, however. But ND hasn't faced a red-zone package such as OU's either. Bell will always be the X-Factor on OU's offense. 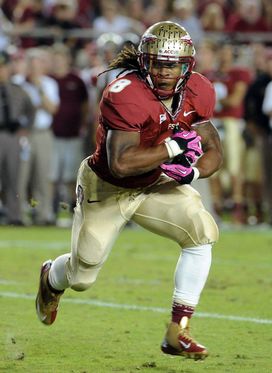 US PRESSWIREWith the injury to Chris Thompson, Devonta Freeman must step up for FSU.

3. Florida State RB Devonta Freeman: The Seminoles have once again found success on the ground this season, ranking No. 15 in the country in rushing offense. But a lot of that damage was done by leading rusher Chris Thompson, who returned from a season-ending back injury last year. However, the run of bad luck continued for Thompson last week as he suffered a season-ending injury once again. He was averaging 7.5 yards per carry, so there's no question it's a big loss for FSU. But the 'Noles do have backfield depth, and in the past two games sophomore Devonta Freeman has combined for 140 yards on 18 carries. His two fourth-quarter touchdown runs against Miami (FL) last week were huge, and he'll be on the spot this week when the 'Noles play a surprisingly strong Duke squad. James Wilder Jr. will also get plenty of touches, while Lonnie Pryor and even Debrale Smiley will also be in the mix.

4. Florida OT Xavier Nixon: The Gators left tackle didn't have a great day against South Carolina stud defensive end Jadeveon Clowney last week. It will be interesting to see if the Gators coaching staff gives Nixon help on the edge when star Georgia outside linebacker Jarvis Jones is matched up against him. It will also be interesting to see how healthy Jones' ankle is after missing last week's game versus Kentucky. When healthy, he is a dominant force that has recorded 9.5 tackles for loss and 5.5 sacks this year. Florida will need to utilize the double-team to give Nixon help when Jones is lined up against him, because it wasn't pretty last week against Clowney.

5. Kansas State RB John Hubert: The native Texan will have to have a strong game against Texas Tech to complement the rushing of Heisman Trophy frontrunner Collin Klein if Kansas State is going to remain unbeaten. The Wildcats will play a Texas Tech team that similarly destroyed West Virginia and whose quarterback, Seth Doege, has slowly entered the Heisman conversation. The real bright side for Texas Tech fans, however, has come on the defensive side of the ball, as the Red Raiders are allowing just 282 yards per game after giving up 486 yards per game last season. Hubert has rushed for 658 yards on 114 carries (5.8 yards per rush) and eight touchdowns this fall, but the 5-7, 191-pound junior had just 52 yards on 16 carries last week in the rout over the Mountaineers. With the Red Raiders keying on Klein, Hubert may be able to find some room to run on option plays.