With National Signing Day just two weeks away, the focus of the National Football Post's college football coverage has turned to recruiting.

While these schools won't make many Top 10 or even Top 25 rankings by the end of Signing Day, they certainly are primed to bring in quality talent that may end up developing quite well and help the program ascend their conference standings.

Indiana: Kevin Wilson is working wonders in Bloomington, as the Hoosiers are positioned to bring in one of the program's most talented hauls in memory. Georgia native Rashard Fant bypassed SEC offers and is the Hoosiers' gem of this class. He's an athlete who can play receiver but who may project best as a cornerback. Meanwhile, Wilson was able to get defensive tackle Darius Latham to flip from Wisconsin and defensive end David Kenney III to flip from Iowa. Army All-American safety Antonio Allen and linebacker Kristopher Smith are also in the fold and should develop into solid Big Ten defenders. Wilson and his staff understand that going outside of the state is huge, and they have been able to do that this cycle. Now, the Hoosiers just need to make sure they sprinkle in a few more recruits from the JUCO ranks, including a few cornerbacks and a quarterback. And keep an eye on Florida running back Fred Coppet, who could visit Bloomington before Signing Day. 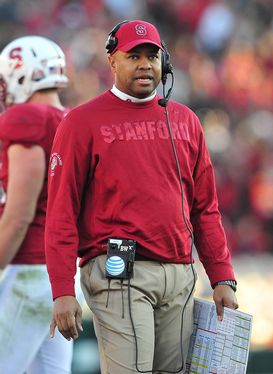 US PRESSWIREDavid Shaw's 2013 class will be small, but the Cardinal have hit on some top targets.

Stanford: David Shaw and the Cardinal will bring in a small class this cycle, but they have keyed in on two positions that are vital to their operation: tight end and linebacker. Eric Cotton Jr., Austin Hooper and Greg Taboada are hopeful that they will be on the receiving end of many passes from quarterback Ryan Burns, who is arguably a Top 5 pocket passer nationally. Texas decommit Durham Smythe is also of interest at tight end if the Cardinal can get him to commit. And outside linebackers Peter Kalambayi and Sean Barton will be counted on as their careers progress to help keep the Cardinal 3-4 defense effective. Meanwhile, two more offensive linemen, David Bright and Thomas Oser, are being brought in to add to last year's stellar group. Shaw and Co. would like more help in the secondary, so keep an eye on uncommitted cornerback Johnny Johnson before Signing Day.

Maryland: Randy Edsall and his staff did a great job last year by keeping receiver/returner Stefon Diggs in-state and getting immediate production from him, and they will need to continue to get a couple of recruits each year to step in and have an impact if the Terps want to return to the postseason. Edsall is doing a good job for the most part of keeping the top local talent, as Washington D.C.'s Deon Long and Derwin Gray are on board. Long was a star at Iowa Western Community College in 2012 and will step in at receiver, while Gray could step in immediately on the offensive line, perhaps at tackle. Getting impact defenders was a huge priority this cycle, and cornerback Will Likely III could get a look at nickelback early in his career. Meanwhile, outside linebackers Derrick Hayward, Jalen Brooks and Jermaine Carter will bring much-needed depth.

Kansas: Charlie Weis has addressed several key needs for the Jayhawks with this 2013 class. Weis and his staff have signed one of the best junior college classes, and plugging in quick fixes will help this squad become more respectable in a tough Big 12. The Jayhawks will have a lot of these commitments on campus this spring, so that will help the integration process as Weis finishes up his first full recruiting cycle at Kansas after being hired late in last year’s cycle. The goal was to get some of the nation’s best JUCO talent in order to pull off a quick fix rather than wait for high school talent to develop over a few years. Will it work? Offensive line is still a bit of a concern heading into Signing Day, but defensive tackle Marquel Combs, defensive end Chris Martin and defensive back Cassius Sendish will get a chance to play right away in Lawrence. Combs had offers from programs such as Arkansas, Michigan State, South Carolina and Texas A&M.

Washington State: At the center of any Mike Leach recruiting class is typically a quarterback, and that is no different this year as Tyler Bruggman, an Arizona pro-style signal-caller who had offers from schools such as Arkansas and Michigan State, is on board. Providing instant impact from the junior college ranks will be Vince Mayle, a California wide receiver who possesses good size at 6-3 and 220 pounds. Inside linebacker Peyton Pelluer is the gem of the defensive haul, but the Cougars may want to add help at cornerback in the closing two weeks before Signing Day. Daquawn Brown is a good recruit, but adding at least one more would help in a pass-happy league.