Five-star linebacker Matthew Thomas, who was one of the most talented defenders nationally in the Class of 2013, reportedly wants to be released from his Florida State scholarship so he can sign with either Georgia or USC. 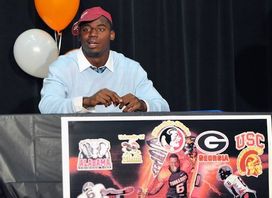 US PRESSWIREClass of 2013 recruit Matthew Thomas does not want to play for the 'Noles.

According to Manny Navarro of The Miami Herald, Thomas said he informed Seminoles head coach Jimbo Fisher and defensive coordinator Jeremy Pruitt in late April that he will not report to school in the fall and that he hopes he will be allowed to play somewhere else. However, the 6-3, 205-pounder said that the coaches do not want to release him and plan to visit him to try and talk things over.

Thomas, one of the best outside linebackers in the nation last season, said he didn’t make the decision he really wanted to on National Signing Day.

“What happened was on Signing Day I wasn’t sure who I wanted to sign with. I had issues with different schools," Thomas said. "But when I told my mom I didn’t want to sign with anybody and wait and give it a few days she said I couldn’t do that. She said, ‘FSU is a good school – pick them. It’s close to home.’ I wasn’t agreeing with it. But I felt like I was being disrespectful to her if I didn’t sign. So I made her happy.”

Thomas said he also felt pressure to commit because he was making the announcement live on ESPN. He said that the idea of playing at FSU just hasn’t felt right and that his parents support him in his desire to be freed from his signed LOI.

“My dad talked to me and gave me some facts about the situation,” Thomas said. “If I tried to go to a school in FSU’s conference I would have to sit out a couple years. But that’s not what I want to do.

“I’ve been in Miami all my life. Georgia needs linebackers. It’s a big program. I have family in Georgia. USC, growing up I never thought I would have an opportunity that big. I just want to go have fun and play football.”

We'll see if Fisher and his staff can convince Thomas that Tallahassee is the right place for him to be or if FSU does indeed decide to part ways with the defensive talent.