If Florida is to once again become an upper-echelon team in the rugged SEC, consistent above-average play will be needed from the quarterback position.

With preseason camps starting to open across the country, the spotlight is shining bright on the battle under center in Gainesville between sophomores Jacoby Brissett and Jeff Driskel.

Gators head coach Will Muschamp has maintained that he likes both signal-callers and is confident that the team can be successful with either one. So it is possible that the pair could share equal time under center, particularly in the season opener when the Gators host Bowling Green. 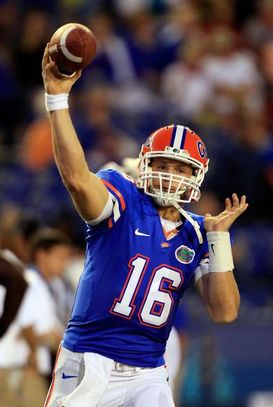 Jeff Driskel is locked in a tight preseason battle with Jacoby Brissett.

The problem arises the following two weeks when the Gators travel to College Station for a raucous environment against SEC newcomer Texas A&M and then head to Knoxville for a date with rival Tennessee. While the Aggies have question marks along the line, especially at tackle, as well as in the secondary, College Station will pose as tough an atmosphere for whoever is under center for the Gators. And what if there is no separation between the two QBs after fall camp or following the Bowling Green game? While the Aggies may give up some points as they adjust to their new league and a new DC, their offense should be efficient under the direction of Kevin Sumlin and his staff. So the Gators will have to find a way to score some points to keep up.

The Volunteers, meanwhile, will be looking to play as well as they did last year defensively under Justin Wilcox, the coordinator who left to run Steve Sarkisian's defense in Washington. New Vols DC Sal Sunseri will look to bring a little Alabama flair to Knoxville, and he'll have plenty of good material to mold into an attacking hybrid defense. Florida will have its hands full, especially on the road.

Muschamp has maintained that he would prefer to have one quarterback emerge as the starter before the Sept. 1 opener against Bowling Green. But has either signal-caller made significant improvement this offseason to stand out in preseason camp?

Brissett was thrown into the fire last season, having to line up for his first career start against No. 1 LSU in Baton Rouge. He finished 2011 by completing just 46 percent of his passes for 206 yards and two touchdowns. Driskel, meanwhile, looked just as overwhelmed in his first college action. He played in five games in 2011 without a start, completing just 47 percent of his throws for 148 yards and two interceptions. Not even the offensive mind of Charlie Weis could rescue this offense last fall.

It would help the two quarterbacks' cause if the Gators can find enough consistent playmakers on offense, which was new coordinator Brent Pease’s primary focus this spring. Receivers Andre Debose, Frankie Hammond and Quinton Dunbar combined to catch 45 passes for 829 yards and six touchdowns last season, but can they be consistent options for Brissett and/or Driskel? The play of the tight ends was disappointing this spring, and that's a position that needs to be productive in this offense. However, the suspect offensive line impressed Muschamp with its toughness this offseason, and that unit will go a long way in determining just how good the Gators can be this fall.

However, nothing will be as important as the play at the quarterback position. If Brissett and/or Driskel can limit their turnovers and improve in their second year, the Gators' offense could be decent enough to complement a defense that returns 10 starters from a unit that ranked eighth nationally in 2011.

Muschamp hopes to find out a lot about his young signal-callers on the practice field over the next three weeks, when the two former highly rated high school quarterback prospects look to take the reins of the Florida offense.