Florida held its spring game in Gainesville on Saturday under very windy conditions and in front of 38,000 fans, a number that was down 15,000 from last year's attendance.

Let's open up the notebook from the Blue team's 21-20 victory over the Orange team.

Rising sophomore quarterbacks Jacoby Brissett and Jeff Driskel, who are battling for the starting job, took turns running the first-team offense. Meanwhile, Tyler Murphy led the second-stringers. This battle will continue into the fall, but both signal-callers wanted to make a strong impression to close out spring drills. Brissett, who took the first snap with the first team offense against the first team defense, hit early enrollee freshman Latroy Pittman on a nice deep ball for 43 yards before finishing up the drive with a four-yard touchdown pass to receiver Quinton Dunbar for the game's first score. Brissett also had a long completion to walk-on Michael McNeely, a 52-yarder that was the team's longest pass of the day. Pittman is the player to watch, though, because he received a lot of praise this spring and this Gators team is desperate for playmakers to emerge. Tight end Trey Burton caught a late 34-yard touchdown, but Brissett's two-point conversion try sailed over Solomon Patton's head. Both quarterbacks led scoring drives of less than a minute, so that's good news for Gator fans hoping that the offense under new coordinator Brent Pease could be a quick-strike attack when necessary. Pease showed some Boise State gimmicky looks at times, which we should all expect in the fall.

Neither Brissett nor Driskel separated himself as the No. 1 quarterback, but that wasn't expected. Both QBs played pretty well, with Brissett looking a bit more comfortable in the pocket while Driskel was better on the run. Whoever does end up starting will likely utilize Jordan Reed, though, as he should get a lot of looks in this offense, especially in the red zone. Omarius Hines also had a nice day with five catches. Brissett finished 9 of 16 passing for 233 yards and two touchdowns, while Driskel went 12 of 14 through the air for 147 yards, including a 44-yard pass to Andre Debose, and a rushing touchdown.

A rededication to the run 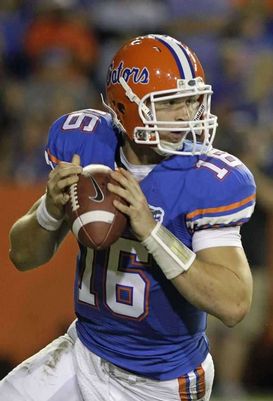 Jeff Driskel played well in Florida's spring game and remains in a tight battle with Jacoby Brissett for the starting QB job.

Driskel had a one-yard touchdown run, and the run game in general played very well. Former linebacker Chris Johnson had a three-yard touchdown and Mack Brown had a five-yard scoring dash. Johnson and Brown had 50 yards and 31 yards, respectively. Hunter Joyer added a touchdown run of three yards. The run game is central to head coach Will Muschamp's vision of a stronger, more physical team. And the impressive display by the backs is a nice positive to take away from this contest. Muschamp has been pleased with the improvement across the offensive line, which he said has helped the rushing attack. "We're just better up front," he said. Expect more up-the-middle run plays to be called with east-west runners Jeff Demps and Chris Rainey gone. Starting running back Mike Gillislee finished with 35 yards on 6 carries.

Quote of the day

Receiver Quinton Dunbar on new offensive coordinator Brent Pease: "Pease understands us more. He's more of a teacher instead of just yelling at us all the time." Apparently Charlie Weis liked to yell a lot in his one season in Gainesville.

Star defensive end Ronald Powell sprained his knee in the first half. The defensive line could have used him, as the unit didn't generate too much of a pass rush. Muschamp and defensive coordinator Dan Quinn have been impressed with Powell's offseason work, and the hope is that the nation's top defender in the Class of 2010 is ready to have a monster season. Safety Matt Elam, who had groin surgery in January before practicing early in the spring, tweaked it earlier this week. Linebacker Jon Bostic had back spasms Friday, so he was held out of the game. Cody Riggs was also hurt, but the extent of the injury is unknown. Offensive tackle Xavier Nixon injured his left shoulder, and the extent is also unknown. Meanwhile, cornerback Marcus Roberson sat out with a neck injury and defensive tackle Dominique Easley missed the game with an injured knee.