Spring practice kicks off in Gainesville on Wednesday as Florida looks to put behind a disappointing debut season under head coach Will Muschamp in 2011.

Let's take a look at some of the storylines that will play out over 15 practices as the Gators prepare for their spring game on Saturday, April 7.

Can the Gators find any playmakers?

The most surprising aspect of the Florida offense the last couple of seasons has been the lack of consistent playmakers. Quarterback play and offensive line woes have been major issues, but high production from the skill positions hasn't occured, which has derailed the squad. New coordinator Brent Pease has arrived after Charlie Weis took the head job at Kansas, and the hope for Muschamp is that he will instill a multi-dimensional offense that will feature a strong downhill rushing attack. Pease has had success at a variety of stops throughout his career, and his creativity that he displayed at Boise State last season will certainly be shown. However, at the end of the day, Muschamp wants this offense to be a no-nonsense attack. Jeff Demps and Chris Rainey are gone, so Mike Gillislee and others will be asked to step in and become feature backs. Can Gillislee consistently pick up a blitz and develop as a pass-catching option? And with Deonte Thompson gone, Andre Debose will need to be focused on being a go-to receiver. He's dangerous, as evidenced by his three kickoff returns for touchdowns, but can he be a consistent receiving weapon? The Gators need more vertical threats down the field if this offense is going to improve on its 105th national ranking in total offense in 2011. Either way, look for a lot of play-action, especially with a young QB, and expect the tight end to be a featured player in this offense.

Will a quarterback emerge from the pack? 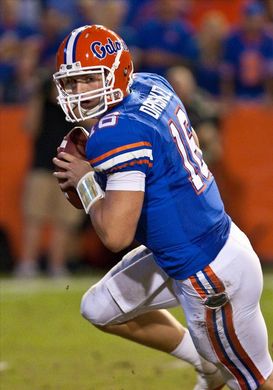 ICONJeff Driskel is competing with Jacoby Brissett for the starting QB job.

For all of the talk about developing a strong ground game, this team has no shot of winning an SEC East title unless a sound passing game can be relied on each and every Saturday. Sophomores Jacoby Brissett and Jeff Driskel have more mobility than John Brantley, which is a good thing if the offensive line can't develop an increased toughness. Brissett and Driskel, however, completed less than 50 percent of their combined throws for less than 5.0 yards per attempt last season. Inexperience led to turnovers, so the hope is that one signal-caller can emerge as the clear-cut starter with a strong spring. Or, better yet, both play so well that Pease and Muschamp have a very difficult decision to make in the fall. Driskel may be the better passer, but he must become more comfortable in the pocket and not take off and run as often as he did last season. A better offensive line will perhaps make him more comfortable, and we'll see if new strength and conditioning coordinator Jeff Dillman has helped the O-Linemen get stronger and tougher.

And if the offense still isn't any better, at least Muschamp and coordinator Dan Quinn can rely on a defensive line that should be even better after a solid 2011, led by juniors Ronald Powell, Sharrif Floyd and Dominique Easley, who still needs to fully recover from a torn ACL. Their rush defense was solid statistically but is capable of improving. The unit struggled versus the run against Alabama and LSU, and that was with defensive tackle Jaye Howard, who is now gone. The spotlight will now shine brighter on Omar Hunter and Leon Orr. The one area where Florida really struggled last fall was in creating turnovers, as it caused just 14 opponents' miscues all season. A better pass rush, led by Powell, could help a secondary that was very young in 2011. Marcus Roberson and Loucheiz Purifoy are talented cornerbacks.