For all of its offensive skill, Illinois remains defensive

One of the biggest reasons why Ron Zook was able to guide Illinois to a 7-6 mark and a Texas Bowl victory over Baylor last season was because of first-year coordinators Paul Petrino and Vic Koenning.

Petrino helped guide the Illini's offense under a new starting quarterback, Nathan Scheelhaase, and he simplified the schemes enough to allow his young signal-caller to be comfortable and rely on the legs of running back Mikel Leshoure, who was drafted this past April by the Detroit Lions.

Meanwhile, Koenning helped direct a defense that was one of the more underrated units early in the Big Ten season before tailing off a bit toward the end of fall. Future NFL draft picks Martez Wilson, Corey Liuget and Nate Bussey helped anchor a unit that, because of their departures, entered this season as a bit of a question mark.

While we're only three games into the 2011 campaign, this defense is starting to answer its critics. 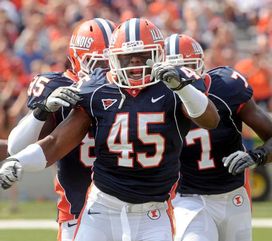 Jonathan Brown and the Illini defense won't be going under the radar much longer.

Petrino may get a lot of the attention for the work he has done with Scheelhaase -- and rightfully so -- but Koenning's work with an unproven unit has helped Ron Zook's squad get off to an undefeated start, including a win over Top 25 foe Arizona State last weekend.

In their 17-14 home win against Dennis Erickson's Sun Devils, the Illini registered six sacks on quarterback Brock Osweiler and recorded 12 tackles for loss against an offense that entered the game averaging 42.5 points and 504.5 offensive yards per game.

Sophomore linebacker Jonathan Brown led the way in the victory, recording an interception, 3.5 tackles for loss and 1.5 sacks to earn Big Ten defensive player of the week accolades.

Through three games, the Illini rank seventh in the nation against the run, giving up just 63.7 yards per game and 2.1 yards per carry. The pass rush has also been impressive, as the Illini rank 12th in the country with 11 sacks. It's also been an opportunistic unit while the offense has controlled the football, as Zook's squad ranks 14th in the FBS in turnover margin.

With a new athletic director and his unproven track record of maintaining consistency in a program, this is a big fall for Zook.

With a high-powered offense and continued strong play from the defense, the Illini could emerge as real dark horse contenders in the Big Ten.