The 2012-13 college football bowl season kicked off this past weekend, as Arizona notched a thrilling last-second win over Nevada in the New Mexico Bowl, while Utah State capped off a terrific season with a 41-15 victory over Toledo in the Famous Idaho Potato Bowl.

So what games are on tap this week?

Let's take a look at the four matchups scheduled to take place in the next seven days.

San Diego State is riding a seven-game winning streak, thanks largely to its power run game. The Aztecs are averaging about 229 yards per game on the ground, but BYU is holding opponents to just 84 rushing yards per game. So it will be interesting to see whether San Diego State can move the football effectively on Thursday night at Qualcomm Stadium. The Aztecs are one of only four teams in the country that have rushed for more than 150 yards in every game this season, but the Cougars have allowed just one team to rush for more than 150 yards on them this season: top-ranked Notre Dame, which put up 270 yards and wore down the Cougars in the second half. 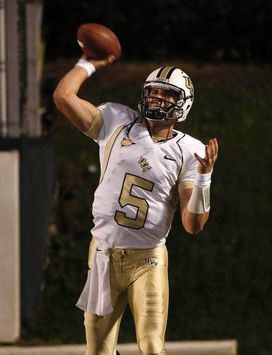 US PRESSWIREBlake Bortles has thrown for 2,787 yards and 22 touchdowns against just seven interceptions.

Ball State enters this matchup on a six-game winning streak, while UCF is coming off of an overtime loss to Tulsa in the Conference USA championship game. The Cardinals have three All-MAC first-team selections in wide receivers Willie Snead and Jamill Smith and tight end Zane Fakes. Running back Jahwan Edwards is also an offensive threat after piling up 1,321 yards on the ground. Meanwhile, UCF ranks eighth in the nation in fewest penalties per game, and quarterback Blake Bortles has completed nearly 63 percent of his passes for 2,787 yards and 22 touchdowns against just seven interceptions. Running back Latavius Murray has given the Knights a solid ground option, too, rushing for 1,035 yards and 14 scores this season. Both offenses are effective, but UCF’s 29th-ranked defense could be too much for the Cardinals to overcome.

Louisiana-Lafayette returns to the Big Easy one year after its 32-30 victory over San Diego State in its first-ever bowl game. The Cajuns' only loss in their final five games of this season was that 27-20 heartbreaker at Florida, a game they lost on a touchdown off of a blocked punt with two seconds remaining. Louisiana-Lafayette will continue to have dual-threat Terrance Broadway at quarterback after he took over for Blaine Gautier, who broke his left hand on Sept. 29. Gautier returned for the final two games but just came off the bench. Broadway has 2,526 passing yards and 661 on the ground. Meanwhile, East Carolina is back in a bowl game after finishing 5-7 in 2011. Sophomore quarterback Shane Carden threw for a school-record 439 yards in a 65-59 overtime victory over Marshall in the season finale, and his favorite target is fellow sophomore Justin Hardy, who has 83 catches for 1,046 yards and 10 touchdowns. Hardy needs 78 yards to surpass Dwayne Harris' single-season school mark from 2010.

Boise State is very familiar with Sin City, winning the last two Maaco Las Vegas Bowls against Utah and Arizona State by a combined 55 points. While the Broncos have a solid offense, it is not as explosive as in years past. So Chris Petersen's team has relied more on its defense in 2012 to post its seventh straight 10-win season, which is the longest active streak in the country. The Broncos rank in the top 10 in the FBS with 14.9 points and 304.7 yards allowed per game, led by Demarcus Lawrence, who has 9.5 sacks, and J.C. Percy, who registered 101 tackles. Jamar Taylor and Mike Atkinson have also stepped up for a team that lost so much defensive talent to the NFL last April. Meanwhile, Washington is making its third straight bowl appearance, but the Huskies fell 31-28 in overtime to Washington State in the Apple Cup after blowing an 18-point fourth-quarter lead. Quarterback Keith Price had a fumble in the fourth quarter that helped set up a Washington State touchdown, and he threw an interception on the first play of OT that led to the winning field goal. He will need to take better care of the football against a Boise defense that will be looking to capitalize on the Huskies' mistakes.