Four-down territory: Boise State will be in good hands

Four-down territory runs every Monday, Wednesday and Friday morning during the offseason.

• Much has been made of the fact that Boise State's Heisman Trophy finalist Kellen Moore will be without standout receivers Titus Young and Austin Pettis in 2011. There’s no question that the Broncos have work to do to ensure that their vertical passing game remains a threat without the two future NFL draft picks, who combined for more than 2,000 yards and 19 touchdowns last season. But head coach Chris Petersen likely feels a lot better about his receivers after Saturday’s spring game, notably Geraldo Hiwat. The rising sophomore caught five passes for 97 yards, including a 49-yard grab from backup quarterback Joe Southwick. The 6-4 speedster has the size to be a top target and also could be primed to be the team’s best vertical threat after recording just 11 receptions without a score last season. Veteran Tyler Shoemaker also returns after finishing third on the team with 32 catches for 582 yards and five touchdowns last year. And there’s also Kellen’s younger brother, Kirby, who redshirted in 2010. While Moore only played three series under center on Saturday, he will have plenty of time this summer and in fall camp to gain chemistry with his new targets, so Boise fans should not be concerned about the team’s sluggish offensive performance on Saturday. 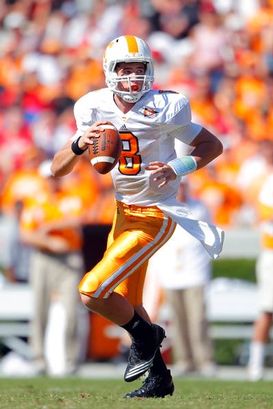 ICONTyler Bray had a spring game to forget on Saturday.

• Yes, those numbers next to Tyler Bray’s name on the stat sheet following the Volunteers’ spring game were correct: 5 of 30 for 122 yards and a touchdown. Twenty-five incompletions in 30 attempts? It indeed occurred, but head coach Derek Dooley maintained that the signal caller’s job is not in jeopardy, nor should it be after his impressive debut last season as a freshman. While Matt Simms had a better day, connecting on 6 of 13 passes for 93 yards and a score, the coaching staff knows that Simms is more valuable in a backup role.

The one player to keep an eye on is early enrollee Justin Worley, who displayed a live arm in completing 6 of 17 passes for 58 yards, with many of his targets dropping the football. Dooley likely would prefer to redshirt the team’s top recruit, who led his high school team to a 15-0 mark and state championship while breaking school and state passing records in 2010. But those decisions, of course, aren’t made until the season begins.

• Miami first-year head coach Al Golden hinted last week that a decision on a starting quarterback likely wouldn’t be made until August, and that statement looks to be prophetic after the Hurricanes’ spring game on Saturday. The race between rising senior Jacory Harris and soon-to-be sophomore Stephen Morris remained very tight after the signal callers threw a pair of interceptions each in the contest. Golden stated after the game that he was disappointed in the picks, which were thrown while Miami was running a vanilla offense. Certainly, Golden and coordinator Jedd Fisch can’t be thrilled with the performances of their top two quarterbacks as the ‘Canes look to re-emerge as ACC contenders.

• The fourth down this Monday is something you don’t want to see occur at any time. But from a recruit on a visit to a prospective school? That’s even worse. Chip Towers of The Atlanta Journal-Constitution has the details.