• The Sporting News has released its complete rankings of all 124 FBS head coaches, and not surprisingly Alabama's Nick Saban heads the list. Saban has won five BCS games in his tenure with the Crimson Tide, and he has three national titles under his belt as well — two at Alabama in 2009 and 2011, and one at LSU in 2004. Simply put, the numbers speak for themselves. But the No. 2 coach on the list, Chris Petersen of Boise State, is the more remarkable name because of how far he has taken his program in a short period of time. The 47-year-old Petersen has a .924 winning percentage and has notched wins over Oklahoma, Georgia and Virginia Tech during his career with the Broncos. Dirk Koetter and Dan Hawkins did very well in Boise, but Coach Pete stands above them all. The way he and his staff have developed players has been fun to watch, and the amount of Bronco players selected in April's NFL Draft proves how valuable the player development has been during his tenure. It will be fun to see the Broncos this year and just how far they've come after losing so many veterans this offseason. 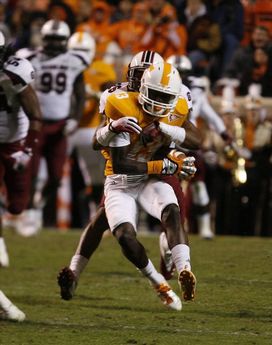 • Michigan State received very good news Thursday morning, as the NCAA granted wide receiver DeAnthony Arnett a waiver to play this season. As a true freshman in 2011, Arnett caught 24 passes for 242 yards and two touchdowns. The former four-star member of Tennessee's 2011 recruiting class wanted to play closer to his hometown of Saginaw, Mich., due to the failing health of his father. The addition will be a big boost for new Spartans starting quarterback Andrew Maxwell, who has big shoes to fill in replacing Kirk Cousins. MSU is thin at receiver, so Arnett should make a big impact.

• The emergence of freshman receiver Trey Metoyer is even more crucial for Oklahoma quarterback Landry Jones when you consider the suspensions Wednesday of Trey Franks, Jaz Reynolds and Kameel Jackson for violating team rules. Jackson was already headed out of Norman, as he announced on his Twitter account earlier in the week. But Reynolds and Franks would have provided OU with much-needed experience at the receiver position. If these suspensions indeed last, Kenny Stills could be the only receiver with any big-time college football game experience for the Sooners in the opener against UTEP. Franks is reportedly out for the entire 2012 season and Reynolds is scheduled to miss seven games. Metoyer has been praised all spring and had a six-catch, 72-yard performance in the spring game. True freshmen Durron Neal, Sterling Shepard and Derrick Woods, along with junior college transfer Courtney Gardner, will join the team in the fall and may have a chance to see early playing time given the dire need at the position.

• Are you ready for conference Media Days? Check out the complete summer schedule for all 11 FBS Media Days.