• The top overall player in the Class of 2014, Da'Shawn Hand, has eliminated Virginia Tech and South Carolina from the running for his commitment, so his final three schools consist of Michigan, Alabama and Florida. The Virginia defensive end has stressed that academics are a priority in this process, leading many to believe that the Wolverines have the edge. Of course, Brady Hoke, Greg Mattison and the Wolverines staff have had a lot of success landing top-tier recruits since their arrival in Ann Arbor, so Michigan certainly could be considered the favorite. But the fact that Florida is one of his finalists without him even visiting Gainesville is good news for Will Muschamp and his staff. Academics certainly favor the Wolverines and the Gators, but three national championships in a four-year span certainly won't hurt 'Bama in any recruitment of a top player either. 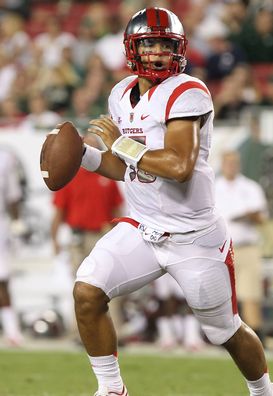 • I'm very interested to see how Rutgers performs in its final year in the old Big East before the Scarlet Knights jump to the Big Ten. Head coach Kyle Flood is very comfortable at the school after taking over head-coaching duties when Greg Schiano left for the Tampa Bay Buccaneers, but Rutgers lost a ton of very good talent to the NFL this offseason, including cornerback Logan Ryan, safety Duron Harmon, linebacker Khaseem Greene and running back Jawan Jamison. So quarterback Gary Nova is one of the biggest keys to this team's success in 2013. The word was that Nova looked like a different QB this spring, but we have to see it in a game first to believe it. He is learning a new offense under coordinator Ron Prince, and confidence will be key for him because he looked beaten down at times in 2012. Defense has always been the Scarlet Knights' calling card, but the offense will need to pick up more of the load this year, especially with a new-look secondary. A dependable run game led by Savon Huggins would be Nova's best friend.

• Wisconsin's secondary became even more thin with the news that safety Reggie Mitchell, who was expected to start for the Badgers this year, will transfer to Pittsburgh. Mitchell will have to sit out this season due to NCAA transfer rules, and first-year Badgers head coach Gary Andersen will need to find a replacement during preseason camp. Wisconsin returns just one starting defensive back, safety Dezmen Southward, from last year's squad. Andersen and coordinator Dave Aranda were depending on Mitchell, who moved over to safety from cornerback this spring. Two junior-college defensive backs, Donnell Vercher and Tekeim Reynard, will now get a chance to play safety with Southward. And the team still has junior Michael Trotter. But the loss of Mitchell is a blow because he had a standout spring.

• Notre Dame will pay a visit to Arizona State after all, as the Fighting Irish and the Sun Devils reached a compromise that will really benefit ASU and its fans. ND wanted out of the series because it is reworking its schedule after agreeing to play five ACC games per year starting in 2014, but it did not have a buyout in the original contract. The Sun Devils wanted the game to remain, and the two teams will square off in Tempe on November 8, 2014. However, the Sun Devils won't make a return trip to South Bend in 2017. Of course, the two teams will meet this season at Cowboys Stadium on October 5. Anyone who has been to Tempe knows just how great the scene is for a college football game. Or great for any occasion for that matter. But being able to host the Irish is great for the entire ASU community. And it's good for the Irish that the bad PR went away after ASU was angry that they were trying to opt out of the game in Tempe.