Welcome to BCS National Championship Monday. We are now just hours away from deciding the best team in the land. In the meantime, let's take a look at what's happening around the nation on this Monday morning.

• Big news out of Gainesville this morning, as Florida’s junior cornerback Janoris Jenkins has decided to return to school for his senior season. The Gators’ 2011 secondary was looking questionable at best after reports from ESPN and The Gainesville Sun had Jenkins off to the NFL. After playing much of the season with a torn labrum in his shoulder, he had surgery following the Gators’ regular season finale and did not play in the Outback Bowl. It was expected that Jenkins would be taken somewhere in the first round, so his return is quite the surprise. Will Muschamp’s secondary loses strong safety Ahmad Black to graduation and free safety Will Hill could declare early for the draft. Before the Outback Bowl, he wrote “farewell UF” on his Facebook wall. The filing deadline to enter the draft is Saturday. 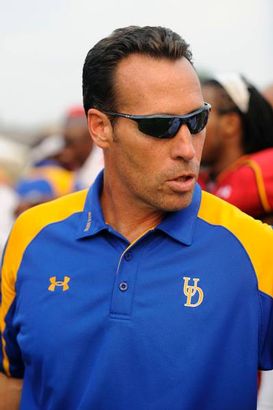 ICONK.C. Keeler is not headed to UConn.

• Delaware head coach K.C. Keeler will not be taking over for Randy Edsall at Connecticut. The leader of the Blue Hens told the Wilmington News Journal that he’s getting killed on the recruiting trail, as rival schools were using his questionable future at Delaware against him. The 51-year-old Keeler, whose team fell to Eastern Washington on Friday in the I-AA championship game, says he loves Delaware but was flattered by UConn’s interest. He has guided his alma mater to a 74-42 record, three NCAA title games and one national title in nine years. The school could be receiving a new academic center and weight room in the future and Keeler said he wants to remain a part of the growing program.

• From the speculation department: If LSU’s Les Miles leaves LSU to take the Michigan job, which direction would the Tigers turn for his replacement? Perhaps Auburn offensive coordinator Gus Malzahn? He was the hottest commodity not named Jim Harbaugh in the last month-plus and turned down the Vanderbilt job already. But this is LSU — the Bayou Bengals. That’s a job that no one would be able to turn down.

• The Todd Graham-Pitt saga continues as the Tulsa head coach seems to be the leading candidate, but the Post-Gazette's Paul Zeise reports that he has not officially been offered the job as of Sunday night. The hangup seems to be around numbers, as Tulsa currently pays him $1.3 million but Graham is looking for about $1.8 million plus more for his assistants than the Panthers want to pay. Meanwhile, the backup candidate may no longer be Penn State defensive coordinator Tom Bradley, who was reportedly in Dallas on Sunday to interview with Connecticut for its coaching opening. In Steve Pederson’s second go-around looking for a new leader for the Panthers, he’s interviewed Alabama assistant head coach Sal Sunseri, Florida International coach Mario Cristobal, Wisconsin offensive coordinator Paul Chryst, Stanford assistant coach Greg Roman and Virginia Tech defensive coordinator Bud Foster.