Four-down territory: No love for LSU?

Let's take a look at what's happening across the nation on this Monday morning...

• Oregon moved up to No. 2 in The Associated Press Top 25 poll on Sunday, passing LSU and sitting just behind defending BCS national champion Alabama after the Ducks rolled to a 49-0 victory over Arizona while the Tigers held on for a too-close-for-comfort 12-10 win over Auburn. While I have had Oregon atop my Pac-12 power rankings well before USC's loss to Stanford, I don't think LSU should be penalized for going on the road in SEC play against a rival and pitching a shutout as it did against Gene Chizik's squad. While polls at this point are just fodder for Monday morning discussions at work, dropping a team like LSU just seems unreasonable to me. Meanwhile, arguments could be made for Florida State to be the No. 2 team after its 49-37 victory against Clemson. South Carolina and Georgia also have looked stellar. But it's hard for me to see any other team besides LSU in the No. 2 spot, especially because its lone loss since the beginning of last season was to Alabama in the title game. And the Tigers seem to be on a collision course with the Tide once again.

• Running back Derrick Henry, a Florida native who is one of the top players in the Class of 2013, is ready to commit for a second time. The former Georgia pledge will announce his decision on Thursday, and many recruiting analysts maintain that Alabama is the favorite. However, Tennessee remains in the mix, and Henry enjoyed his visit to Knoxville last weekend. Keep in mind that Alabama has two high-quality running backs already committed in this cycle. Henry has a great combination of power and speed, and he'd be a home-run commit for Derek Dooley and his staff. Crimson Tide head coach Nick Saban has considered the idea of playing Henry at linebacker, but Henry wants to be a RB. Will that tilt the balance in favor of the Vols? 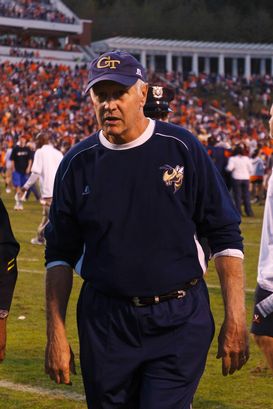 • Georgia Tech's heartbreaking loss to Miami (FL) on Saturday does not exactly bode well for Yellow Jackets defensive coordinator Al Groh, who is in his third season in Atlanta. The Hurricanes scored the last 23 points of that 42-36 overtime win, and Groh's unit gave up 609 total yards, including 436 through the air to Stephen Morris. With GT holding onto a 17-point lead, Miami had drives of 74 yards, 82 yards, 88 yards and 91 yards. Outside linebacker Brandon Watts said after the game, “I felt like we weren’t prepared.” That's coaching, and a comment like that doesn't bode well for Groh.

• I've maintained that Arkansas athletic director Jeff Long would stick with head coach John L. Smith through thick and thin this season and not make a move during the middle of the season. But despite the fact that Rutgers came into last Saturday's game undefeated, there's no excuse for the Razorbacks to lose that contest. And it's especially troubling that the Hogs trailed for the majority of the game. With quarterback Tyler Wilson back in the starting lineup and pacing the offense, once again the Razorbacks defense failed to show up. Scarlet Knights quarterback Gary Nova had a career day in helping Rutgers pile up 525 yards against the Paul Haynes defense. The Hogs are now 1-3 and have to go on the road to play Texas A&M and Auburn. At this point, maybe it's a good thing that Smith and Co. get to leave Fayetteville.