Let's take a look at what's happening around the nation on this Monday afternoon. 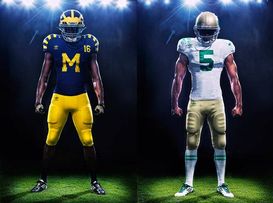 Here are the retro uniforms that Michigan and Notre Dame players will wear for their Sept. 10 clash.

• The retro uniforms that Notre Dame and Michigan will wear when the Fighting Irish and Wolverines meet on Sept. 10 were finally revealed last week, and I must say that Adidas did a great job on the designs. When the teams meet at night for the first time since their 1990 clash in South Bend, Brian Kelly's squad will wear white jerseys with green shoulder stripes along with gold helmets featuring a shamrock logo for the first time since the 1960s. Stitched at the bottom of the jerseys are the years that ND won national championships. Meanwhile, the Michigan jerseys will feature a block 'M' on the front and numbers on the helmets. While I am a traditionalist, I think both jerseys will be really cool to see while watching the night contest. Which new look has the edge? I'd give it to the Irish.

• Boise State officials met with the Committee on Infractions in Indianapolis on Friday to discuss their case of five programs, including football, violating NCAA rules by giving student-athletes improper benefits. While the football violations were minor, the NCAA gave the athletic department the "lack of institutional control" tag because of major infractions within the women's tennis program. Boise officials are fighting that charge and have already self-imposed penalties on the football program. While a decision has yet to be made from the committee, I can't see this ultimately being a huge setback for Chris Petersen and Co.

• Oregon continues to deal with off-the-field issues after star cornerback/kick returner Cliff Harris was cited for driving 118 mph on a suspended license. The 20-year-old was pulled over at about 4:35 a.m. local time Sunday and cited for driving with a suspended license and exceeding the speed limit in excess of 100 mph. It will be interesting to see how head coach Chip Kelly handles this setback for the rising junior, who had six interceptions and set an Oregon record with four punt returns for touchdowns in 2010. Last month, linebacker Kiko Alonso pleaded guilty to misdemeanor charges of trespassing and criminal mischief and was suspended indefinitely from the team by Kelly. Like Harris, Alonso was expected to be a big part of a Ducks defense replacing notable players such as Casey Matthews and Kenny Rowe.

• Luke Fickell met with the media on Monday afternoon for the first time as Ohio State's new head football coach. Check out the full video of the presser HERE.