Let's take a look at what's happening across the nation on this Friday morning...

• There will likely be plenty of changes across the head-coaching landscape in the SEC. As of now, we know that the Kentucky and Arkansas jobs will be open at the end of this season. Wildcats athletic director Mitch Barnhart announced that Joker Phillips will not return in 2013, and there are several candidates that will get consideration for that opening. Yesterday at the NFP, I made the case for Duke's David Cutcliffe to get offered the job. Meanwhile, expect Razorbacks athletic director Jeff Long to take hard looks at Louisville's Charlie Strong and Texas Tech's Tommy Tuberville. What other jobs may open in Mike Slive's league? Well, Tennessee athletic director Dave Hart will have to decide if Derek Dooley deserves a fourth year in Knoxville. Despite the Volunteers winning in embarassing fashion over Troy last week, they could still finish 7-5 and net a bowl berth. How can Hart make a move then, especially considering the tough situation Dooley inherited? The one job that has garnered the most attention, though, is at Auburn. On Thursday, AuburnUndercover.com reported that Louisville offensive coordinator Shawn Watson’s name has been mentioned by Auburn president Jay Gogue as a potential candidate if Gene Chizik isn’t retained after this season. I can say for a fact that Watson will not be the Tigers' next head coach. It just won't happen no matter how well the Cardinals' offense has played this fall. Watson has spent most of his career as a coordinator and was just 11-22 in three season at Southern Illinois from 1994-96 as head coach. If Chizik is dismissed, the Tigers will get a bigger name who has had success as a head coach. Keep in mind that Chizik did not succeed at Iowa State before arriving on The Plains, so the Tigers won't go down that road again despite Chizik leading the school to the BCS national title in 2010. 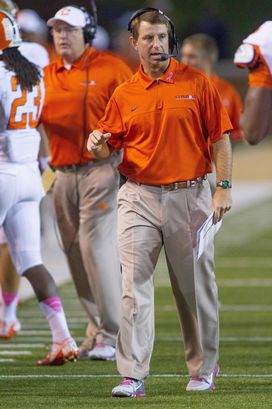 US PRESSWIREDabo Swinney and the Tigers will likely be shut out of the ACC title game after FSU snuck by Virginia Tech.

• It was a rough Thursday for Dabo Swinney and the Clemson Tigers. First, Robert Nkemdiche — the top overall prospect in the Class of 2013 — decommitted from the school. While the Tigers still have a lot of strong defenders with verbal pledges, Nkemdiche was the crown jewel of the class, as he is a ferocious defensive end. And then, to top the day off, the Tigers lost their chance to control their own destiny for a spot in the ACC title game when Virginia Tech failed to seal the deal against Florida State at Lane Stadium. It appears now that the Tigers are on track for the Chick-fil-A Bowl. My latest projections have Clemson battling Texas A&M in what would be a fantastic matchup.

• One player that I left off my latest Heisman Trophy Watch List is Jordan Lynch of Northern Illinois. And I am having regrets. The dual-threat signal-caller is currently No. 1 in the nation in total offense with 3,517 yards rushing and passing, No. 1 in the nation in points responsible for with 210 and the No. 1 rusher in the nation with 1,342 yards. I still mentioned Stefphon Jefferson of Nevada in my last rankings, so I have no problem giving out non-BCS love. But Lynch unquestionably deserved some recognition on my list. His team's lone loss came in the opener against Iowa when the Huskies outplayed the Hawkeyes, and Lynch has unquestionably been one of the best players in America this fall.

• College football commissioners have to be smiling after CBSSports.com reported Thursday that ESPN has offered nearly $500 million a year for the rights to broadcast the college football playoff that is set to begin in 2014. According to the report, commissioners at the BCS meeting in April thought that a playoff would be worth $350 million per year. At a $500 million per season price, a 12-year deal would be worth almost $6 billion. ESPN has an exclusive 30-day negotiating window, but it isn't clear if that window has begun. FOX is also interested in bidding on the rights to the playoff, and look for NBC Sports to possibly be involved as well.