…True freshman quarterback Tyler Bray sits atop Tennessee’s depth chart as the Volunteers (2-6, 0-5) prepare for Saturday’s road game against Memphis. Bray was 9 of 15 for 159 yards with two touchdowns and one interception in the shootout loss to South Carolina Saturday afternoon. The highly recruited signal caller from California replaced junior Matt Simms early in the second half against the Gamecocks. Simms was 10 of 13 for 153 yards with a score when he was pulled. Expect Bray to receive plenty of snaps as the Vols continue to look to the future under first-year head coach Derek Dooley. 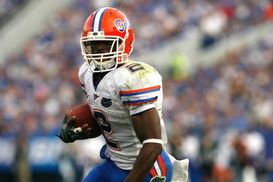 ICONJeff Demps scored a touchdown in Florida's win over Georgia.

…Just when Florida (5-3, 3-3) was declared dead, the Gators used the “World’s Largest Outdoor Cocktail Party” to fix their issues on offense. Florida was re-energized by Trey Burton, Chris Rainey and Jeff Demps in the team’s 34-31 overtime win over Georgia — Florida’s 18th win over Georgia in the past 21 meetings. The Gators are very much alive in the SEC East race. They play at Vanderbilt this week and would win a third straight division crown by defeating South Carolina at home on Nov. 13. We still have a chance to see that Florida-Alabama rematch after all.

…Ole Miss continues to struggle defensively, and it hasn’t helped that Tyrone Nix’s unit has dealt with the injury bug. The Rebels (3-5, 1-4) could be without their two leading tacklers against Louisiana-Lafayette on Saturday, as safety Damien Jackson was battling an injured knee prior to the loss to Auburn, and linebacker Jonathan Cornell left the game with an ankle injury. Ole Miss has lost three in a row, and even Jeremiah Masoli can't perform the role of savior.

…It’s been a tough season for Kentucky, as the Wildcats (4-5, 1-5) seemingly can’t win a close game. Joker Phillips’ squad fell to Mississippi State 24-17 Saturday — the third loss for the Wildcats by a touchdown or less. They catch a break with Charleston Southern on the schedule this weekend, but they’ll need to beat either Vanderbilt or Tennessee in the final two games to go bowling for the fifth straight year.