• Temple landed its new head coach on Monday, as New York Giants assistant offensive line coach Matt Rhule will take over the Owls program. Rhule spent six years in Philadelphia in a variety of assistant coaching positions, so the 37-year-old is very familiar with the program he is inheriting from Steve Addazio, who left to take over at Boston College. In fact, Rhule interviewed for the Temple vacancy in 2010 before Addazio landed the gig. While I thought Mario Cristobal would be a great hire for the Owls, Rhule certainly should fit in comfortably at Temple because he knows the program inside and out. He had a lot of success recruiting at the school, and he had a hand in bringing in Temple's top three quarterbacks on the current roster. While the league talent level has jumped since his departure (the Owls went from the MAC to the Big East), Rhule should be up to the challenge of making Temple a respectable Big East program. 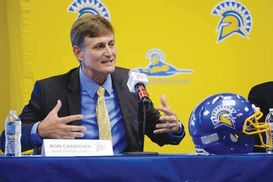 • San Jose State lost program-builder and savior Mike MacIntyre to Colorado, but the Spartans landed a very suitable replacement in Ron Caragher, who took over for Jim Harbaugh at San Diego and went 44-22 in six seasons. Former Boise State athletic director Gene Bleymaier is now working in the same capacity at SJSU, and you can't argue with his hiring track record. With the Broncos, Bleymaier brought in Houston Nutt, Dirk Koetter, Dan Hawkins and Chris Petersen. All four of those coaches had great success at Boise, and Caragher might be able to keep the Spartans playing at a high level after MacIntyre.

• Good news for new Cincinnati head coach Tommy Tuberville, as Bearcats quarterback Brendon Kay has been granted a sixth year of eligibility by the NCAA. While Kay spent most of his career on the sideline because of injuries, he finally saw extensive action this fall when he replaced Munchie Legaux as the starter. He went 70-of-113 for 966 yards with six touchdowns against two interceptions this fall, and his experience will be important for Tuberville's offense in his first season with the Bearcats.

• Wisconsin would be wise to give North Dakota State's Craig Bohl a long, hard look for its vacant head-coaching position. The national coach of the year in the FCS has the Bison in the FCS title game, and he has compiled an 88-32 record in 10 seasons at NDSU. Wisconsin athletic director Barry Alvarez would be getting someone who served as an assistant coach at Wisconsin (1987-88), and Bohl employs a run-first offense, which is what Alvarez wants to continue to see in Madison.