…You have to love the fact that Washington head coach Steve Sarkisian took to his Twitter account to announce that quarterback Jake Locker was cleared to play in the Huskies’ Thursday night tilt against UCLA. After practice on Tuesday, Sark said that doctors still had not yet cleared the senior to play in his final home game. Locker missed the game on Nov. 6 at No. 1 Oregon with a broken rib, so redshirt freshman Keith Price started under center instead. But roughly 90 minutes after practice ended, Sark tweeted, “Jake Locker is cleared to play! Let’s make sure Husky Stadium is rockin’ for the the entire nation to see. Go Dawgs!” With nearly everyone on a social-networking site these days, it's not a bad way for coaches or anyone else to get a message out, is it? 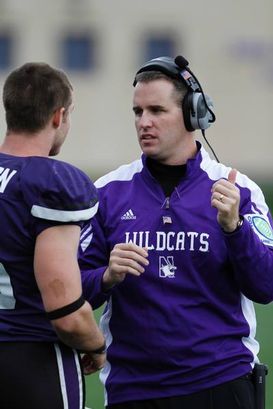 ICONNU's Pat Fitzgerald will be coaching the Wildcats at Wrigley Field this weekend.

…Northwestern’s football team was supposed to travel from Evanston to Wrigley Field in Chicago Saturday morning for the game against Illinois via the city’s elevated train system, but those plans were shelved on Tuesday. The Chicago Transit Authority and school lawyers could not resolve liability issues in time, so the Wildcats will not be able to ride the “El” train to Thursday’s practice or the actual game. Pat Fitzgerald’s squad will take a bus instead. NU is treating the in-state matchup as a road game, as the team will stay at a hotel on Friday night. Fitzgerald understands that many of the fans in attendance might not be the traditional fans at NU’s Ryan Field. While the game will be a sellout, with Northwestern given 30,000 tickets initially, Illini Nation will be prevalent if not in the stadium then on the rooftops across the street.

…Iowa State quarterback Austen Arnaud’s college career is over. The Cyclones’ senior signal caller suffered a major knee injury in last week’s loss to Colorado and will need total reconstruction of his left knee. This is a tough blow for a team that always seems to fight its way into a bowl game each year under Paul Rhoads — no matter if it suffers blowout losses along the way. The three-year starter is the program’s career leader in completion percentage (59.7 percent) and is second in school annals in passing yards (6,777) and touchdown passes (42). The Cyclones host Missouri on Saturday, and they need a win to become bowl eligible. Backup Jerome Tiller will be under center, and it won’t be an easy task against the Tigers’ defense.

…Five finalists for the Bronko Nagurski Trophy were announced on Wednesday by the Football Writers Association of America and the Charlotte Touchdown Club. The Nagurski Trophy is given to the nation’s top defensive player regardless of position. Check out this impressive list of finalists: Auburn defensive tackle Nick Fairley, Clemson defensive end Da'Quan Bowers, Georgia linebacker Justin Houston, Boston College linebacker Luke Kuechly and LSU cornerback Patrick Peterson. The award will be presented Dec. 6 in Charlotte, N.C.