• North Carolina issued a release on Wednesday morning announcing that running back Ryan Houston has a fractured scapula and will undergo surgery Thursday. The Tar Heels’ leading rusher in 2009, Houston redshirted the 2010 season after missing the first five games while the NCAA investigated the football program in Chapel Hill. Houston suffered the injury during a team scrimmage this past Saturday. There is no word on how much time he will miss, but his presence is huge for a team that lacks any valuable experience at the running back position. Redshirt freshman Giovanni Bernard would likely step into Houston’s place if the injury shelves him for any length of time, but Bernard himself is coming off a torn ACL. Houston led the Tar Heels with 713 rushing yards and nine rushing scores in 2009. The redshirt senior has gained 1,157 yards and scored 18 touchdowns on the ground in his career. 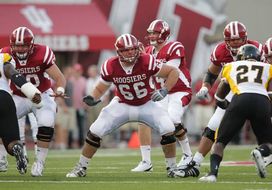 ICONAaron Price (No. 66) has been forced to give up football because of a degenerative condition in his back.

• Indiana’s offensive line took a hit as first-year head coach Kevin Wilson aannounced on Tuesday that offensive lineman Aaron Price has been forced to give up football because of a degenerative condition in his back. The left guard was active for the early part of spring practice this year, but he was unable to continue because of the condition. Price started the first 10 games last year as a redshirt freshman and played in all 12 of the Hoosiers’ contests.

• As we all know, you have to take any sort of commitment with a grain of salt in college recruiting. So when Jarron Jones says he’s committed to Penn State but is still in line to take visits, it wouldn’t be smart for fans of the Nittany Lions to start rejoicing quite yet.

“I committed to Penn State just like that, but I will take (visits) to five other schools,” Jones told Scout.com. “My top five is in order as follows — Penn State, Syracuse, Pittsburgh, Rutgers and North Carolina.”

The 6-6, 305-pound defensive tackle from Rochester (N.Y.) is the sixth Penn State commitment for the Class of 2012. Of course, that comes with a major asterisk. The Nittany Lions landed top defensive tackle Jamil Pollard earlier this week, so it will be interesting to see if Joe Paterno and Co. can hold onto Jones and build a formidable defensive front moving forward.

• Jon Embree is cleaning house in Boulder, as defensive end Forrest West was one of five players dismissed by the first-year Colorado head coach. West led the Buffaloes with 5.5 sacks in 2010 despite just starting one game. Wide receiver Will Jefferson, guard Max Tuioti-Mariner and tight ends Henley Griffon and Harold Mobley were the others to be let go. While Jefferson and Tuioti-Mariner are battling knee injuries, Embree would not go into great detail on why the other three won't return.