• Remember when Nebraska quarterback Taylor Martinez was the talk of the college football world following his dominant Thursday night performance at Kansas State in early October last season? Well, with new coordinator Tim Beck implementing a new spread offense following the dismissal of former OC Shawn Watson, the talk coming out of Lincoln is that the dual-threat signal-caller is no sure thing to start the team’s first game as a member of the Big Ten next fall. 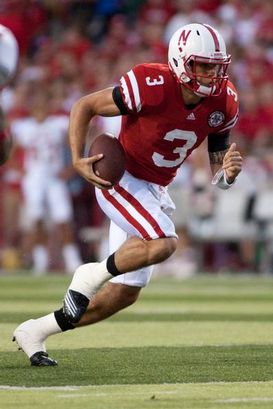 There’s no question Martinez struggled after dealing with a midseason ankle injury, but he wasn’t the only Cornhusker who played poorly down the stretch. The offensive line allowed an incredible 25 tackles for loss the last two games, and Watson didn’t always put his playmakers in position to succeed. “T-Magic” is still the same player, when healthy, who nearly became the third freshman quarterback in NCAA history to rush for 1,000 yards. The freshman All-American will get competition from redshirt freshman Brion Carnes and incoming freshman Jamal Turner because they are more suited to play in the spread, but it’d be shocking if Martinez wasn’t under center for the regular-season opener against Tennessee-Chattanooga at Memorial Stadium the first week of September. Now, if top baseball prospect Bubba Starling decides to come to Lincoln despite being a likely first-round pick in June's Major League Baseball draft, then Martinez may want to start worrying…

• Baylor ended the 2010 season on a four-game losing streak, souring the momentum head coach Art Briles had built throughout the early portion of the season as the team allowed 188 points and 2,147 total yards in the four season-closing setbacks. While the Bears must play better defense down the stretch to avoid another letdown, finding a running back to complement quarterback Robert Griffin III will be another top priority as the team begins spring practice.

The race to replace Jay Finley, who ran for a Bears record 1,218 yards in 2010, will feature Terrance Ganaway, Jarred Salubi, Glasco Martin and Isaac Williams. These four backs will begin the battle for reps starting on Monday. Ganaway is a rising senior who had 46 carries last season, while rising junior Salubi averaged eight yards per carry in limited opportunities last fall. Martin could be intriguing because the rising sophomore is a converted receiver. The Bears also signed three running backs from the Class of 2011 — Jermichael Selders, Anthony Webb and B.J. Allen.

• Penn State quarterback Rob Bolden sought a transfer shortly after the 2010 season but was denied by head coach Joe Paterno. Well, just when it looked as if the rising sophomore was staying put at State College, the former starter told FightOnState.com that he isn’t so certain. “There is no definite answer on if I'm gonna stay or if I'm gonna leave,” Bolden said Sunday. “We're just gonna wait it out, see what happens in the spring and go from there.” It would seem that Bolden wants to see how the reps are split in spring and how he fares in the battle with starter Matt McGloin, who threw five interceptions in the bowl loss to Florida, and redshirt freshman Paul Jones. If he doesn't win the job, would he pursue a transfer once again?

• Oklahoma is one of the popular picks to emerge as the national champion next season, but the Sooners will only be able to remain near the top of the polls if the defense plays more consistent. So who’s the next standout Sooners hybrid linebacker primed to become a household name? Like current Philadelphia Eagle Keenan Clayton, who played safety in high school before being developed into a linebacker in Norman, rising sophomore Tony Jefferson is next in line to assume the position. OU’s top recruit last season, Jefferson started at safety at Eastlake High in California before playing a little corner for the Sooners last season. But look for him to add weight to his 6-foot frame this spring in preparation for his new role. Class of 2011 safety recruit Franklin Shannon could also be a hybrid defender, but he may be a full year away before having quite the impact.