• Penn State’s quarterback race has yet to be settled, but there's no need to worry if you are a fan of the Nittany Lions. Just think back to last fall, which was Bill O'Brien's first season in State College, and how the former longtime NFL offensive coordinator was able to coax a fantastic season from Matt McGloin. The former walk-on was the Big Ten's most prolific passer in 2012, completing 270 of 446 passes for 3,266 yards with 24 touchdowns and just five interceptions. While no one is expecting true freshman Christian Hackenberg or JUCO transfer Tyler Ferguson to put up such numbers, either one will be successful in this offense this fall. Whoever is operating the unit will be surrounded by good tailbacks led by 1,000-yard rusher Zach Zwinak, a nice assortment of tight ends and a deep receiving corps led by star junior Allen Robinson, who led the Big Ten in receiving yards and touchdown catches last year. Because both QBs are more similar than different, the offense should look the same no matter who starts. And the weapons around him will ease the transition. Hackenberg is the future at the position, but O’Brien said Tuesday that the race is still “very close” and that he could play both guys this year. 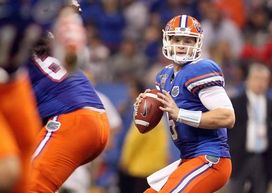 US PRESSWIREDoes Jeff Driskel have enough playmakers around him?

• One player who has been locked into his starting gig since last season is Florida's Jeff Driskel, who must get better at avoiding sacks this fall. Too often he showed hesitancy in the pocket, although the offensive line should not have the depth issues it had in 2012. But do the Gators have enough playmakers for Driskel? The signal-caller, who passed for more than 200 yards in a game just twice all of last season, has a lot on his plate this season because outside of tailback Matt Jones and do-everything Trey Burton, there are a ton of question marks, especially at receiver. Driskel will have to pass well to keep defenses from stacking the box, but the receiving options are limited. Andre Debose is out for the year, Latroy Pittman is untested and Quinton Dunbar had only 383 receiving yards last season. True freshman Demarcus Robinson is a reason for optimism, because he has ideal size, strength and speed. He needs to be the explosive receiver the Gators are craving this year, because there's a reason why Loucheiz Purifoy, the team's best corner, will take snaps on offense. A lot of pressure will be on the Gators dual-threat QB, who was one of the most sought-after players in his class coming out of high school (same class as Brett Hundley, Braxton Miller and David Ash). Does Florida have enough weapons to be a serious SEC title contender? Will it have enough for a Week 2 tilt with Miami (FL), which will field one of the more explosive offenses in the country?

• Speaking of explosiveness, Ohio State head coach Urban Meyer finally landed his missing piece in his first few recruiting cycles when he was able to bring in former Oregon commit Dontre Wilson. The Buckeyes were looking for more players who can excel in space, and Wilson could be a poor man’s De’Anthony Thomas — lining up at running back, in the slot and all over the field. While OSU has tailback depth, Wilson will immediately be an integral part of the offense and gives the Buckeyes a much-needed new toy. He has blazing speed (he was a track star in high school) and played against the best competition in Texas at DeSoto High School. Meyer loves the Percy Harvin-type hybrids, so the expectations are high for Wilson.

• Notre Dame head coach Brian Kelly said earlier in camp that sophomore defensive end Sheldon Day is “as impressive a player as we have on defense,” and he could be a real breakout player in 2013. We all know about Louis Nix III and Stephon Tuitt, the team's best defenders who are likely NFL first-round draft picks. But Day has impressed the coaching staff with his offseason work and he is ready to step in and make an immediate impact with Kapron Lewis-Moore in the NFL. He has an explosive first step, and there’s a reason why LSU and Florida made offers when he was in high school. This is a defense that could be better than 2012 — even without Heisman Trophy finalist Manti Te’o.