Auburn head coach Gene Chizik made official what many had projected before preseason camp began when he named Kiehl Frazier the team's starting quarterback for the much-anticipated season opener against Clemson in the Georgia Dome.

The dual-threat signal-caller outperformed Clint Moseley this past spring, completing 7-of-9 passes for 92 yards in the team's spring game and proving to be a real threat with his legs in the contest. And he carried that momentum into preseason drills, showing Chizik and new coordinator Scot Loeffler that he is the right person to take full command of the Tigers offense. 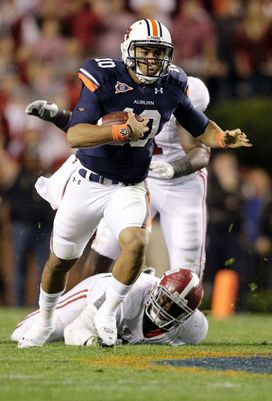 US PRESSWIREKiehl Frazier will get a chance to show the Auburn faithful that he is the QB of the future on The Plains.

Not too long ago Tigers running back Tre Mason raved about how the true sophomore Frazier was proving why he was a highly regarded prep star both with his play and the way he had become much more vocal in workouts.

Auburn's offense suffered a significant drop in production last season after the loss of 2010 Heisman Trophy-winning quarterback Cam Newton. Frazier only had 12 pass attempts, as he was used primarily for his legs as a Wildcat quarterback. But now he will be thrust into more high-pressure passing situations, especially in the opener against a talented Clemson defense that is still upset over its performance in the team's Orange Bowl thrashing at the hands of West Virginia.

But now there is hope on The Plains, where Frazier will try to show his teammates, coaches and fans that he is the same player who completed nearly 65 percent of his passes for nearly 3,000 yards and 42 touchdowns as a senior at Shiloh Christian High School in Springdale, Ark.

He has the opportunity to show what he can do as a passer after a full year at the college level. And if a defensive revival under new coordinator Brian VanGorder can occur, this Auburn team can once again become a tough out in the SEC West.