Frazier positioning himself to start at Auburn

While Auburn head coach Gene Chizik and his offensive staff have not yet named a starting quarterback for the much-anticipated season opener against Clemson in the Georgia Dome, it appears that all of the momentum is with Kiehl Frazier on The Plains.

The dual-threat signal-caller outperformed Clint Moseley this past spring in the Tigers' quarterback derby, completing 7-of-9 passes for 92 yards in the team's spring game. He also proved to be a real threat with his legs in the contest, which is an aspect of the offense that new coordinator Scot Loeffler will be sure to utilize in his game plan every Saturday.

While Moseley will have the opportunity in preseason camp to earn the top spot on the depth chart, the job appears to be Frazier's to lose, as Joel Erickson of the Columbus (Ga.) Ledger-Enquirer wrote this past week. 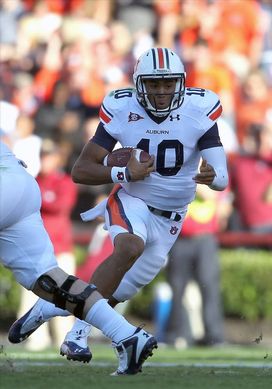 ICONKiehl Frazier may have the edge in Auburn's QB battle heading into preseason camp.

Erickson discussed the situation with Tigers running back Tre Mason, who said that the true sophomore is showing why he was a highly regarded prep star.

“Kiehl has turned into a great quarterback,” Mason said. “He’s going back to his high school ways, how he dominated in high school. He’s dominating now, so I can’t wait to see what he does.”

Mason says that Frazier has also become much more vocal in workouts as he has grown into a leadership role.

“He’s really getting on people for messing up,” Mason said. “He won’t just sit there and be quiet. He’ll let them know.”

Last season, Auburn's offense suffered a significant drop in production after the loss of 2010 Heisman Trophy-winning quarterback Cam Newton. Frazier only had 12 pass attempts, as he was used primarily for his legs as a Wildcat quarterback. Former offensive coordinator Gus Malzahn didn't have the luxury of putting Frazier into high-pressure passing situations because of his youth. And the team never really found an offensive rhythm, going through quarterbacks Barrett Trotter, Moseley and Frazier. It also didn't help that top receivers Emory Blake and Trovon Reed suffered injuries, limiting the team's downfield passing game.

However, there is hope on The Plains.

Frazier is the same player who completed nearly 65 percent of his passes for nearly 3,000 yards and 42 touchdowns as a senior at Shiloh Christian High School in Springdale, Ark. What he needs is an opportunity to show what he can do as a passer after a full year at the college level. And while he will be operating a new offensive system with Malzahn at Arkansas State and Loeffler as the new OC, Auburn fans should be excited by Mason's recent comments.

And if end Corey Lemonier leads a defensive revival under new coordinator Brian VanGorder, this Auburn team can once again become a tough out in the SEC West.