Future at UNC may be murky, but Davis could survive

The NCAA sent out its official notice of allegations to North Carolina’s football program on Tuesday after a thorough investigation following the agent and academic scandals that rocked the Chapel Hill campus before and during the 2010 season.

And despite the extensive chaos that ensued beginning with the Marvin Austin drama, Butch Davis may not be going anywhere.

The Tar Heels head coach released a statement through the school Tuesday night in light of the university receiving the official 42-page report. 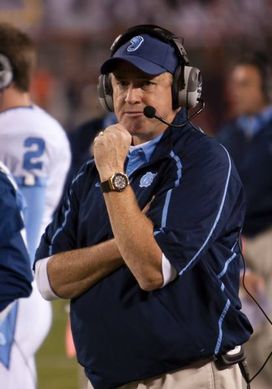 ICONButch Davis is 28-23 in five seasons at UNC. It appears, despite major violations, he will still be coaching this fall.

“I feel terrible that these allegations occurred under my watch,” he said in the statement. “I especially regret that the university has had to endure this scrutiny because of the football program. The responsibility for correcting any problems that put us in this position is mine, and I take that responsibility very seriously.

“I want to thank our fans for the tremendous support we have received. Their loyalty and support has been especially appreciated by our student-athletes. The opportunity I have to serve the University of North Carolina is one that I cherish, and I will continue to focus on improving every aspect of our football program.”

The very support from the fans is nothing new for Davis, who has long enjoyed strong backing from the school’s fan base. Most importantly, though, he’s received strong support from the administration — even as the investigation took UNC through its darkest hours.

But even more crucial than support from fans and the administration is the fact that the NCAA did not implicate Davis in the official notice of allegations, which includes nine major violations levied against the program.

In the letter sent by the NCAA, former associate head coach John Blake is cited for unethical behavior due to his relationship with late agent Gary Wichard. Former tutor Jennifer Wiley is named, as well, for her role in the academic scandal. Even a former player, Chris Hawkins, is named for rules violations in dealing with recent players.

But Davis seems to be getting a pass — at least from the NCAA. While it is still early in the game — the NCAA’s Committee on Infractions will ultimately hand out its punishment after an October hearing — don’t expect university chancellor Holden Thorp or athletic director Dick Baddour to make a change with Davis.

UNC seemed to avoid a lack of institutional control charge because it has maintained that Blake and Wiley acted and covered up on their own — without help from Davis. Since the NCAA could not prove that Davis or oversight officials had knowledge of Blake and Wiley’s actions, the damage will fall on Blake, Wiley and others who tried to cover up their acts.

Sure, the process needs to play itself out before a final verdict is reached. And punishments in the form of lost scholarships and vacated wins are likely. But because of the magnitude of Blake’s role in the player-agent aspect of the investigation and the school’s ability to put the spotlight on the ousted associate head coach, Davis may be primed to lead his talented bunch on the field in the 2011 opener against James Madison after all.

And many didn’t think that was at all possible when this investigation first began.