Future unclear for Ash at Texas

The future of David Ash at Texas is unclear after head coach Charlie Strong announced on Monday that the Longhorns starting quarterback will miss this week's game against BYU. 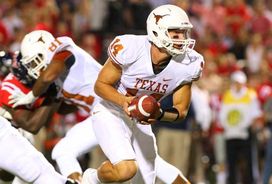 Ash, who missed much of last season with concussion symptoms, is dealing with yet another injury. The signal-caller was hit hard several times in the team's 38-7 win over North Texas on Saturday. Strong said Ash did not show any symptoms of being hurt during the game, but he had headaches and dizziness late Saturday night, so trainers had him come in.

Sophomore Tyrone Swoopes will start for the Longhorns against the Cougars this week. Strong said no decision has been made on if backup Jerrod Heard will play as well.

Swoopes was a highly rated member of Texas' 2013 recruiting class and appeared in five games last season. However, he only threw for 26 yards and rushed for 79 yards and a touchdown.

Ash was the clear frontrunner in the competition to start this year after being cleared to return to the team during the offseason, so it's a huge loss for the 'Horns. If he indeed suffered another concussion, his college career could be over. And it would, of course, be best for him to walk away in that case.

The Longhorns, of course, were already dealing with a blow when it was learned that center Dom Espinosa had fractured a bone in his leg. He's scheduled to have surgery on Wednesday and will miss the season, making the offensive line vastly inexperienced.