Georgia has the weapons to knock off Alabama

While a Notre Dame-Alabama matchup in Miami on January 7 would arguably be the most-anticipated BCS National Championship game of all-time, a rematch of the Sugar Bowl between Notre Dame and Georgia following the 1980 season would also be an exciting way to cap off a tremendous 2012 college football campaign.

With their win over USC last week at the L.A. Coliseum, the Fighting Irish booked their ticket to South Beach and will play the winner of the SEC Championship game between the Crimson Tide and Bulldogs. While many believe that the Tide will defeat the 'Dawgs at the Georgia Dome in Atlanta on Saturday, Mark Richt's squad has been one of the hottest teams in the country. And they pose as a dangerous threat to knock off Nick Saban and the defending national champs. 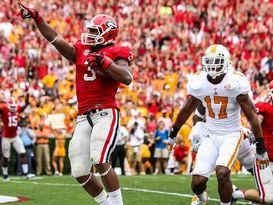 Will Todd Gurley and fellow back Keith Marshall have success against the Alabama defense?

If Georgia is to advance to Miami, Richt's squad needs to be able to run the football effectively Saturday with freshmen Todd Gurley and Keith Marshall, who will face a stout Alabama rush defense. While Texas A&M star dual-threat quarterback Johnny Manziel averaged 7.6 yards per carry against the Tide, Aggies running back Ben Malena averaged just 3.6 in that contest. And in Bama's close win over LSU, Tigers running back Jeremy Hill averaged 3.7 yards per rush. Murray cannot do damage with his legs, so the workload will fall to Gurley and Marshall against the Tide front seven. But while A&M and LSU were able to wear down Kirby Smart's defense, the Bulldogs just aren't quite the same physical offense. Gurley and Marshall need to be productive on first and second downs so Murray does not face a ton of third-and-mediums and third-and-longs.

Meanwhile, Murray quite simply has to play the best game of his Georgia career.

The veteran Bulldogs signal-caller doesn't have to throw for 300 yards and multiple touchdowns, because Alabama won't allow that to happen. What he does have to do, however, is play turnover-free, remain patient and be effective in his pre-snap reads against a defense that loves to disguise its formations. And receivers Tavarres King and Malcolm Mitchell will need to be able to get open against the Alabama secondary. And while this may not be a defensive backfield as strong as 2011, it hasn't suffered too many meltdowns. What Murray will have to do is have a similar game to that of LSU's Zach Mettenberger, who had his coming-out party this year against the Tide. The question will be if Murray's receivers are able to get open and out into space.

Having Michael Bennett and Marlon Brown healthy against the Tide would make this Georgia offense extremely dangerous, especially because the weak spot of the Tide's defense is the secondary. But Murray has still played very well without those two weapons, and Mitchell has been vital moving back to the offensive side of the ball. Murray has also had good rapport with tight end Arthur Lynch, who could be an important aspect of this offense Saturday as the Tide could be susceptible on intermediate routes.

Defensively, Todd Grantham's 3-4 unit has arguably looked like the best defense in the nation this final month of the season. Jarvis Jones, who has 19.5 tackles for loss, six forced fumbles and always brings pressure to the quarterback, leads a unit that also features east-to-west linebacker Alec Ogletree and star safety Bacarri Rambo. But perhaps the most important players on the Georgia defense Saturday will be interior linemen John Jenkins and Kwame Geathers. Both eat up so much space when they are on the field and will cause problems for an offensive line that is the best in the nation. They are big bodies that can allow Jones to get pressure on Tide quarterback AJ McCarron.

There's no question that McCarron looked human this fall in the close win over LSU and the loss to A&M. And the pride of this Tide defense took a hit in their loss to A&M, a game in which Manziel may have won the Heisman Trophy. But a win over the Dawgs puts Bama right where it expected to be at the beginning of the season: in the BCS title game.

If Murray is able to solve the Tide defense as Mettenberger and Manziel did this fall, the Dawgs could be on their way to Miami for a shot at unbeaten Notre Dame. But if he's rattled early by the Bama defense and McCarron starts off hot, it could end up being a disappointing night for Bulldog fans.