Spring practice kicks off in Athens on Tuesday as Georgia tries to build off an SEC East division-winning 2011 campaign.

Let's take a look at some of the storylines that will play out over 15 practices as the Bulldogs prepare for their spring game on Saturday, April 14.

Concerns on the O-Line

While the Bulldogs return 15 starters combined on offense and defense from their SEC East title squad, Mark Richt and Co. do lose three players from the offensive line who made 125 combined career starts. Georgia must replace left tackle Cordy Glenn, who likely will be a first-round pick in April's NFL Draft, four-year starting center Ben Jones, and right tackle Justin Anderson. Kenarious Gates, who played left guard last year, is likely to start at left tackle. The 6-5, 328-pounder is very athletic. David Andrews will get the first chance to replace Jones at center, while junior college transfer Mark Beard could slide in at right tackle. The Bulldogs, meanwhile, return starting guards Chris Burnette and Dallas Lee. Keep an eye on Watts Dantzler, who could line up at tackle or guard, as well as redshirt junior Austin Long as a candidate at left tackle. And then there is stud Class of 2012 recruit John Theus, who will join the program in the summer. How much of an impact will he make in fall camp?

How thin is the defensive backfield? 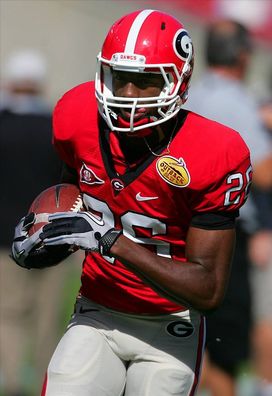 ICONMalcolm Mitchell is moving over to CB to help out in the Georgia defensive backfield.

This unit has been decimated by graduation, a transfer, dismissals and suspensions. Brandon Boykin graduated, Jordan Love transferred and Nick Marshall and Chris Sanders were kicked off the team. To make matters even worse, returning starters Sanders Commings and Branden Smith are suspended. Malcolm Mitchell, who had a bright future at receiver, has switched over to cornerback, where he is desperately needed. Redshirt freshman Devin Bowman also will be in the mix for a starting role, while Damian Swann and Blake Sailors will need to step up. Safeties Bacarri Rambo and Shawn Williams are very sound, but corner is a major concern for Todd Grantham's defense.

The Bulldogs finished just seventh in the SEC in rushing in 2011, struggling against LSU and Michigan State in the final two games. Of course, facing those two dominant defensive lines had a lot to do with the below-2.0 yards per carry average on over 70 rushing attempts in those defeats. But running back Isaiah Crowell, who had a nice debut season with 850 rushing yards and 5 scores, needs to stay healthy after being nicked up throughout his freshman campaign. It's not easy to adjust to SEC play as a true freshman, so Crowell's first year was a success. He needs to continue to get stronger, however, so that his body holds up. Early enrollee Keith Marshall, who was arguably the top back in the Class of 2012, will try to quickly adjust to college life and help out in the backfield. Richard Samuel will also be in the mix.

Fourth-year junior Aaron Murray has clearly established himself as one of the best quarterbacks in the nation after throwing for over 3,000 yards and 35 touchdowns in 2011. He did have 14 interceptions, however, with six of those coming in the team's four losses. He has talked with coordinator Mike Bobo about improving his footwork and accuracy, so this offseason is critical for him to take yet another step in his development.

Richt needs to replace longtime kicker Blair Walsh, who shockingly struggled in his senior season, connecting on just 21 of 35 field goals. All-SEC honorable mention punter Drew Butler also departs, as well as explosive returner Brandon Boykin. The school's all-time kick return leader showed just how valuable he was in the team's loss to Michigan State in the Capital One Bowl.