Georgia's running back depth will be nearly non-existent when the Bulldogs play New Mexico State on Saturday.

Head coach Mark Richt confirmed on Tuesday that Isaiah Crowell, Carlton Thomas and Ken Malcome have been suspended for one game because they violated team rules. Richt would not get into the specifics of the suspensions.

"They didn't do things the Georgia way," Richt said. 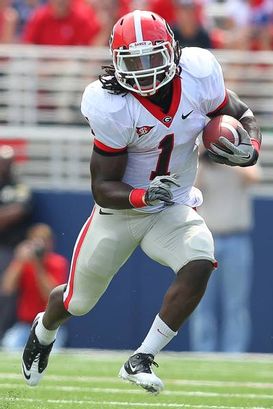 ICONIsaiah Crowell will miss Georgia's matchup with New Mexico State due to suspension.

The true freshman Crowell is Georgia's top tailback and ranks fifth in the SEC with 689 yards on 146 carries. He had 18 carries for 81 yards in Georgia's 24-20 victory over Florida last weekend in Jacksonville.

Thomas, a junior backup, is the Bulldogs' third-leading rusher with 200 yards on 44 carries. The redshirt freshman Malcome, who considered leaving the team earlier this season, made an appearance against Coastal Carolina earlier in the year but has otherwise not played.

Richt doesn't even have the luxury of using second-leading rusher Richard Samuel this weekend because he injured his ankle on the final play of the game against the Gators. Samuel, who has rushed for 240 yards on 73 carries, had surgery and will be out for four weeks.

Redshirt sophomore Brandon Harton, who had 11 carries for 33 yards against Coastal Carolina in his only action this fall, is likely to get the majority of the reps now. Cornerbacks Brandon Boykin and Branden Smith also could see action in the backfield because they have played offense in the past.

This isn't exactly the news Georgia fans wanted to hear after their team climbed back from an 0-2 start to compete for the SEC East crown.