Paul Johnson and the Yellow Jackets hope to rebound from a couple of subpar seasons following their Orange Bowl berth, while Frank Beamer's Hokies hope to get back to a BCS bowl.

Let's take a look at three things to watch in the clash between the Yellow Jackets and the Hokies.

1. Next man up: There's no question that David Wilson was a big part of the Virginia Tech offense last season. In fact, I argued that he should have netted an invite to New York for the Heisman ceremony. With Wilson now with the NFL's New York Giants, Michael Holmes steps in to take over as the presumptive lead back. The redshirt freshman's hard work this offseason has earned him the starting gig, netting top offensive newcomer honors during the team's spring practice after showing the coaching staff that he has very good vision and can excel at blocking. The 6-foot, 208-pounder will have a chance to shine on a bright stage, and he should serve as the perfect complement to dual-threat quarterback Logan Thomas, who should be in for a huge season after improving as the 2011 campaign progressed. Al Groh's defense will be the key to Georgia Tech's fortunes this fall, as players like linebacker Jabari Hunt-Days will need to help shut down opposing offenses. 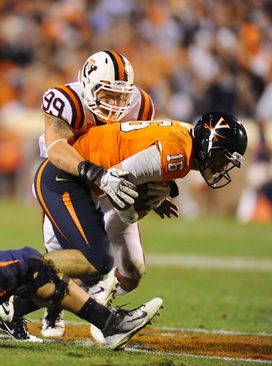 US PRESSWIREJames Gayle and the Hokies will look to shut down the triple-option attack.

2. Front 7 vs. the triple option: The Hokies are used to seeing the Yellow Jackets' triple-option offense since Johnson arrived in Atlanta. And, because this is the opener, they've had an entire offseason to prepare for it. The strength of Bud Foster's defense is the front seven, which helped lead the ACC in sacks in 2011 with 41. All-ACC ends James Gayle and J.R. Collins, tackles Derrick and Antoine Hopkins as well as the linebacker corps will need to be disciplined in their assignments if they want to contain Tevin Washington, Orwin Smith and the option attack.

3. Does GT have a deep threat?: With Stephen Hill moving onto the NFL, no returning receiver for Georgia Tech has a single career reception. Virginia Tech wants to contain the option and force Tech to throw the football. But even if the option attack is efficient, the Yellow Jackets will want to take some shots down the field. Washington was among the national leaders in rushing yards for a quarterback last season and ran for three touchdowns in the loss to the Hokies, but he also had a good passing efficiency rating despite completing fewer than 50 percent of his 150 attempts last fall. Can Jeremy Moore, Jeff Greene, Chris Jackson or Darren Waller emerge as a top pass-catching option?