Eleven weeks of the 2013 college football season are in the books, and it appears that Alabama and Florida State are headed to a showdown in the BCS national title game.

But there is still plenty of football to be played, so let's take a quick look at what could be in store for the best contests of Week 12. 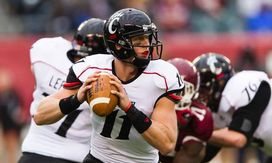 US PRESSWIREBrendan Kay leads the FBS with a 74.1 completion percentage.

Cincinnati at Rutgers: The Bearcats came back from a 10-0 deficit last week to beat SMU behind quarterback Brendan Kay, who leads the FBS with a 74.1 completion percentage. Meanwhile, Scarlet Knights signal-caller Gary Nova passed for a season-high 371 yards in a 23-20 victory over Temple last time out. But Nova's inconsistency remains the biggest obstacle for Rutgers, which beat Cincinnati 10-3 last season. Keep an eye on the Bearcats' Jordan Luallen, who lines up at quarterback in the Wildcat formation. He has rushed 36 times for 178 yards and two touchdowns this fall.

Georgia at Auburn: The Tigers have been on an incredible run one season after their disastrous 3-9 campaign of 2012. Is Gus Malzahn's team a legit challenger to top-ranked Alabama in the SEC West? First, the Tigers need to take care of another longtime rival, Georgia. The Bulldogs outscored the Tigers by a combined score of 83-7 the last two times these teams faced each other, so revenge is on the mind of Malzahn's group. And this is an Auburn defense that has taken to the coaching of new coordinator Ellis Johnson, as the Tigers rank No. 22 nationally in scoring defense and have been very good in the red zone. Offensively, the Tigers lead the SEC at 320 rushing yards per game and 33 touchdowns, but the Georgia run defense is the best the Tigers will have seen thus far this season. And the 'Dawgs are getting a little healthier on offense.

Oklahoma State at Texas: The Longhorns continue their quest for a Big 12 title without leading rusher Johnathan Gray and defensive tackle Chris Whaley, who are both done for the season, as well as top linebacker Jordan Hicks and starting tackle Josh Cochran. Texas has won six straight, while Oklahoma State has five victories in a row. Texas could still win the league with a loss, but the 'Horns still have Baylor left on their schedule. Mack Brown's squad has won the previous four meetings between the teams.

Michigan State at Nebraska: If you compare what these two squads did against Michigan, one could argue that the Spartans should not have too much difficulty putting the Cornhuskers away. Mark Dantonio's squad has a nasty defense and a now-underrated offense. A spot in the Big Ten title game essentially is on the line in Lincoln. The Huskers have yet to lose with Tommy Armstrong Jr. at quarterback, but he has a tough chore this week. Nebraska has no chance if it doesn't get an inspired effort from its defense.

Miami (FL) at Duke: There are huge Coastal division implications for both the Hurricanes and the Blue Devils. David Cutcliffe's squad controls its own destiny due to Clemson's win over Georgia Tech on Thursday night. If the Blue Devils win out, they will play FSU in the ACC title game. The 'Canes, meanwhile, need to win out and have Virginia Tech lose one in order to win the division.

Michigan at Northwestern: Both of these teams have had quite disappointing seasons, especially on the offensive side of the ball. Devin Gardner has not played well since the early part of the season, but he has not received much help from his running backs and offensive line. Meanwhile, injuries should not have derailed the Wildcats' offense as much as it has this fall. Northwestern's last two losses came in overtime and on a Hail Mary to end the game. Can playing at home be the tonic?

Utah at Oregon: The Ducks should be able to bounce back and run the football effectively against the Utes after being held to just 62 yards on the ground in their loss to Stanford last week. But the Utes possess a strong pass rush like the Cardinal, as Kyle Whittingham's bunch leads the nation at an average of 3.67 sacks per game. Both Marcus Mariota and Travis Wilson are banged-up, so both quarterbacks will be under the spotlight. The difference in this one may be the Utes' poor offensive line against an Oregon defense that will be salty from last week's debacle. If it doesn't play better, Utah will not be able to break its three-game slide, which began after the Utes' victory over Stanford.

Texas Tech vs. Baylor: The Red Raiders and the Bears will meet in Arlington in a game with BCS national title implications for Baylor. However, Art Briles' squad needs style points, and it will have to garner them without top receiver Tevin Reese and possibly running backs Lache Seastrunk and Glasco Martin due to injuries. Meanwhile, Texas Tech is trending toward another late-season swoon. Can the Bears stop the Red Raiders' passing attack?

Florida at South Carolina: The Gators are looking to avoid their fifth straight loss in the SEC, but Will Muschamp's team has been ravaged by injuries. The Gamecocks are just a half-game behind Missouri in the SEC East, and the Tigers still must play at Ole Miss and at home against Texas A&M. This is the Gators' third straight opponent coming off of a bye week. While UF's run defense ranks No. 15 in the nation, it has allowed tailbacks Henry Josey and Todd Gurley to do damage in recent weeks. And Mike Davis could be next in line.

Houston at Louisville: Both teams are tied for second in the American Athletic Conference, and both teams were defeated by AAC unbeaten Central Florida. The winner of this game needs to win out and hope that UCF loses twice to win the league outright. Teddy Bridgewater has thrown just three interceptions but will face a Houston defense that leads the nation with 18 picks. Cougars free safety Trevon Stewart leads the conference with four interceptions, and he also has four fumble recoveries.

Alabama at Mississippi State: The Crimson Tide will visit Starkville hoping to get continued strong play from quarterback AJ McCarron, who has been red-hot his last five games. Since the start of October, he's completing 72.7 percent of his third-down passes and is squarely in the Heisman Trophy mix. The Tide will be the Bulldogs' sixth current AP Top 18 opponent, and Dan Mullen's defense allowed 85 points in the two losses to South Carolina and Texas A&M. Quarterback Dak Prescott is questionable this week with an elbow injury.

Stanford at USC: The Trojans are 4-1 under interim head coach Ed Orgeron, and they'll try to beat a Stanford squad that has won four straight and five of the last six in this rivalry. The last three contests have come down to a touchdown or less. The major test the Trojans will face, however, is remaining healthy for a full 60 minutes against the physical Cardinal. 'SC will head into this game with roughly 50 healthy scholarship players, and David Shaw's squad undoubtedly will look to impose its will on 'SC much as it did against Oregon last week.

Oregon State at Arizona State: The Sun Devils are a tough out at home, but the Beavers are coming off of a bye week following a rough stretch. Todd Graham's squad had a real character-building comeback win last week at Utah, and the defense should be able to force a Sean Mannion mistake or two. Mike Riley's team is pretty one-dimensional, and the Sun Devils are strong against the pass.