Georgia held its annual G-Day Game at Sanford Stadium on Saturday, and the most encouraging takeaway for the Bulldogs in closing out spring practice was the play of the young defense.

If Mark Richt's squad has any plans on winning the SEC East crown and getting back to Atlanta for the SEC championship game, a defense that is returning just three starters and was the main focus during the team's spring drills must be able to compete at a high level to complement what should be a strong offense. 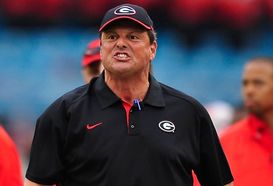 Todd Grantham should be encouraged by how the defense competed this spring.

While too much stock should not be put into the results of any spring game, Richt, defensive coordinator Todd Grantham and the rest of the staff should be encouraged by how the defense competed this spring.

Just think of the talent that was lost from the defensive side of the ball. Perhaps no other unit in college football lost more than Grantham's unit. Linebackers Jarvis Jones, Alec Ogletree and Cornelius Washington, defensive tackles John Jenkins, Kwame Geathers and Abry Jones, safeties Bacarri Rambo and Shawn Williams, and cornerback Sanders Commings are all gone from the 3-4 unit. In all, the ‘Dawgs lost 12 players on defense who started at least two games for them in 2012.

But a lot of talented defenders remain on the roster, including outside linebacker Jordan Jenkins and defensive ends Garrison Smith and Ray Drew. Jenkins, a rising sophomore who had four tackles and one sack on Saturday, should be the next standout pass-rusher for this program after registering five sacks and eight tackles for loss playing opposite Jarvis Jones last season. And while the 'Dawgs lost all four starters from their secondary, last year's rash of suspensions and injuries allowed their backups to log quality playing time. Damian Swann could be an all-SEC performer at cornerback, and safety depth is prevalent with Corey Moore, Connor Norman, Marc Deas and Josh Harvey-Clemons, who will be moved around all over the field after excelling on special teams in 2012. He registered three tackles and a pass breakup on Saturday. Meanwhile, early enrollee safety Tray Matthews had four tackles to finish a strong debut spring.

Also on Saturday afternoon, linebacker Ramik Wilson led the Black defense with eight tackles and a sack, and fellow linebackers James DeLoach and Amarlo Herrera finished up strong springs by recording six tackles each. DeLoach also had a sack. The Black defense, which featured the No. 1s, recorded six sacks and one turnover on the day.

The overwhelming feeling heading out of spring is that this is a young defense that made a lot of progress. After Aaron Murray had a relatively easy time moving down the field on the opening drive, the Bulldogs had a nice stretch of three-and-outs as Chris Mayes, John Taylor and Co. looked stout along the line of scrimmage.

While there is still plenty for the Dawgs to work on over the summer and in preseason camp, Richt and Grantham definitely have a better feel of what they have on defense following the team's spring game. The question now remains whether it will be good enough to get back to Atlanta in December.