Not only has Georgia benefitted from the rapid development of running back Isaiah Crowell and receiver Malcolm Mitchell, but coordinator Todd Grantham's 3-4 defense has grown in its second season as well.

And the Bulldogs have excelled defensively despite experiencing injury woes. 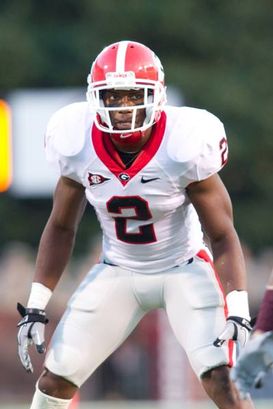 ICONAlec Ogletree is ready to give Georgia's defense some reinforcements.

But the 'Dawgs will enjoy some reinforcements soon as head coach Mark Richt believes that inside linebacker Alec Ogletree will be ready for the team's game against Florida on October 29. The Bulldogs play at Vanderbilt this week before enjoying a bye.

Ogletree, who moved over from strong safety in the offseason, has been out since the first quarter of the opener against Boise State, but he was in full pads at a recent practice after coming back from breaking a bone in his foot against Boise.

Fellow starting inside linebacker Christian Robinson was lost to an ankle injury in Week 2 against South Carolina but has returned and played the past two games. However, he has not been able to get back into the starting lineup because backups Michael Gilliard and Amarlo Herrera have played so well. In fact, Gilliard was named SEC defensive player of the week after a 12-tackle game against Tennessee. He also had a game-clinching sack against the Vols. It was the fourth consecutive game he led the Bulldogs in tackles, and Herrera is tied for fourth on the team with 24 tackles.

Currently, the Bulldogs rank sixth in the nation in giving up just 260 yards per game.