Notre Dame head coach Brian Kelly made the right call when he named Everett Golson the team's starting quarterback for the season opener against Navy in Dublin, Ireland, next Saturday.

The Fighting Irish had staged a four-player battle under center dating back to this past spring. But the magnitude of being the face of Notre Dame football made early enrollee true freshman Gunner Kiel a distant fourth in the race. And after the off-the-field incident involving incumbent Tommy Rees, this became essentially a two-horse race in preseason camp between rising sophomore Golson and junior Andrew Hendrix for the right to start against the Midshipmen.

And as I wrote this past offseason, turning the offense over to Golson was Kelly's best option for the improvement of the offense and the entire program. 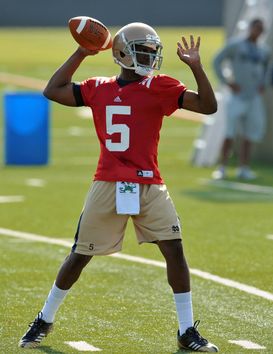 US PRESSWIREEverett Golson will make his first career collegiate start overseas against Navy.

In the team's Blue-Gold spring game in front of 31,582 fans at Notre Dame Stadium, Golson performed like he was the best quarterback on the field and the best fit for this offense.

Despite bobbling a couple of snaps, the 6-foot, 185-pounder showed that he would bring the most athleticism, excitement and intrigue to the position out of all of the signal-callers vying for the starting job.

The Myrtle Beach, S.C., native finished the spring game 11 of 15 for 120 yards and two touchdowns. He ran six times for 25 yards and was the only QB to not throw an interception. And as Kelly has maintained throughout the entire offseason, ball protection was the biggest criterion in the quarterback derby. The Fighting Irish ranked 118th in turnover margin last season, and ND will not be able to win many games with a brutal schedule in 2012 if it turns the ball over as consistently as it did last year.

Last Thursday at the team's Media Day, Kelly noted that Golson had thrown just one interception in 126 passing opportunities up to that point in camp, so his decision-making was certainly top-notch this preseason. And despite not having any game experience, Golson possesses a strong arm and quick feet that should enable him to run Kelly's spread offense efficiently.

If he limits his mistakes, Golson's ability to keep plays alive with his feet and take off and run is huge, but consistently keeping his eyes down the field will be vital. Kelly mentioned after the spring game that Golson makes him nervous on the sideline because he is so electric. Obviously that nervousness has transformed into confidence in preseason drills.

While Golson will remain a work in progress, like all young quarterbacks, his skill set is too immense to stand on the sideline. However, if he struggles, Kelly will have no qualms going to Hendrix, who received playing time late in 2011 when Kelly wanted a change-of-pace option to complement Rees.

Many believed after his extended playing time last season that Hendrix would ultimately win the starting job in 2012 and be the new face of the Irish offense. But experience was trumped by the potential of having an electric playmaker take over the offense in South Bend.

And while Kelly will always utilize his "next man in" approach whenever necessary, Golson has a chance to put his stamp on the job with a standout performance against the Midshipmen next Saturday.