Guiton could take the Cassel path to the NFL

While it appears that Ohio State quarterback Kenny Guiton will be headed back to the sideline this weekend with Braxton Miller cleared by doctors to return to the starting lineup against Wisconsin at Ohio Stadium, the backup signal-caller's future could still be very bright. 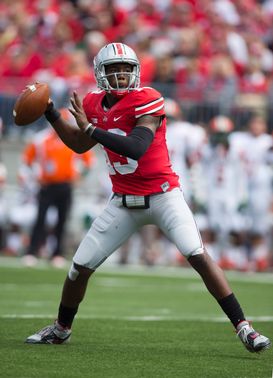 US PRESSWIREKenny Guiton has a quarterback rating of 168.1 this year.

Guiton, who started the past two weeks and played nearly three full games on the season while Miller nursed a sprained knee, has been very impressive during his time in the spotlight, completing 68.4 percent of his passes for 664 yards and 13 touchdowns against two interceptions. The redshirt senior earned back-to-back Big Ten offensive player of the week honors, and he arguably solidified himself as the best backup quarterback in the country.

And some NFL scouts have taken notice.

Guiton has a real good chance of following the path of former USC quarterback Matt Cassel, who was a career backup with the Trojans before impressing scouts at his Pro Day, getting drafted by the New England Patriots in the 7th round of the 2005 NFL Draft and eventually signing a big contract with the Kansas City Chiefs.

Besides rallying the Buckeyes over Purdue last year to keep the team's unbeaten season alive, Guiton has excelled this season against San Diego State, Cal and Florida A&M with Miller on the sideline. His arm is strong enough and accurate, he has good football savvy and decision-making skills as well as very good athleticism. Of course, with the NFL moving toward more athletic quarterbacks, Guiton's become an intriguing signal-caller for scouts to monitor over the last few weeks. And at about 6-3 and 210 pounds, he has NFL size.

Miller's name will be called during the 2014 NFL Draft if he elects to come out. But if he has a strong Pro Day in Columbus, Guiton could get selected by a franchise as well. And, if not, he certainly will have plenty of offers to choose from as an undrafted free agent if he leaves Columbus.

We'll see how Miller performs the rest of the season and whether he is able to shake off any rust early in the team's game against Wisconsin at the Horseshoe on Saturday. No matter what, though, OSU has a legitimate option behind Miller. And that's a good thing for Buckeyes head coach Urban Meyer as well as a possible future NFL franchise.

Quarterbacks such as Teddy Bridgewater, Brett Hundley, Tajh Boyd and Marcus Mariota may be slotted higher in most 2014 NFL mock drafts (if some of those players come out early), but Guiton is now on the radar of scouts for teams who may be interested in developing a signal-caller with more upside than many had believed entering this fall.